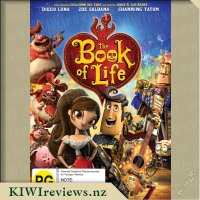 The Book of Life product reviews

THE BOOK OF LIFE, a vibrant fantasy-adventure, tells the legend of Manolo, a conflicted hero and dreamer who sets off on an epic quest through magical, mythical and wondrous worlds in order to rescue his one true love and defend his village.

When I saw the trailer for this I knew it would be a film to watch one day, I love the Day of the Dead and all the gorgeous imagery that comes with it, as well as the traditions behind it but I was hesitant to pay money to see it due to the story centering around winning a woman's heart... Well I finally watched it the other night with my mother and the kids. The story has two gods making a wager as to which boy will win Maria's hand in marriage, we get to watch them grow up in quick time and what shapes them into the men they become. I think it helped with developing the characters this way, gave more insight rather than just boy vs boy for girl.

The film splits nicely between the world of the living and when relevant, the land of the dead and the land of the dead was GORGEOUS, everything that I love about it was there and it was beautifully rendered. The characters could have been done so much better though, Maria is the center of their attention and she's given moments to kick butt but it seems to much of a token gesture and only when the men are getting on her nerves, I would have loved for her to be a bit more well rounded.

The kids and we adults did enjoy the film and it caused a few questions to pop up as well as a few laughs, but I would have liked a little more of a well rounded Maria and less cliches. Still, for the land of the dead scenes, I'd watch this again.