The Book of Life review 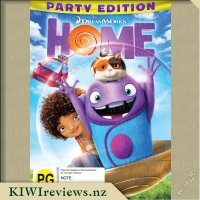 When Oh, a loveable misfit from another planet, lands on Earth and finds himself on the run from his own people, he forms an unlikely friendship with an adventurous girl named Tip who is on a quest of her own. Through a series of comic adventures with Tip, Oh comes to understand that being different and making mistakes is all part of being human. And while he changes her planet and she changes his world, they discover the true meaning of the word HOME.

My biggest issue with animation movies is the voices that are selected to play the roles. Usually it is the flavour of the month and in some instances the voices just do not fit but with Home Jim Parson is amazing as Oh and it was like he was born to play him. His character is just so cute and innocent and learns so many valuable lessons along the way. I don't think anyone else could possibly play the character. I love the way he speaks and the order in which he says things "can I come into the out now?" it had his laughing on more than one occasion or when he heard proper music for the first time "my hands are in the air like I just don't care" literally tears. His dry speach is just ideal for these scenes.

Home is quite the emotional rollar coaster my girls had tears in there eyes and then next minute they where laughing out loud. It is such a fun movie that will appeal to all age groups. It is a tad predictable, coming from an adults prospective but it is just so fun it does not matter. We have now watched this numerous times and it does not get old.

Its colourful, its got messages, its silly but it is oh so good and is worth watching. Its light hearted and its fun and I just love it. One of the best animation movies to come out in a long time.

My elder two children saw a trailer for 'Home' early last year and it had them very keen in seeing it, when they realized that we were going to watch it last night, they were both very excited. My three children were hooked from the first moment that it started and the biggest surprise of all was that my husband, who usually heads off after finishing his food, stayed for the entire film. I love seeing films that go out of the norm, the main child wasn't of white skin coloring and her family wasn't a typical family, it was just her and her mother and there was never any need to go into where the dad was etc.

The story was fun and original, there were still moments where you could guess what was going to happen next BUT there was enough moments where you didn't know exactly how things were going to play out. We adults guessed what the reason behind the constant running but it was done wonderfully and we all thought it well done. There are some very touching moments throughout as Oh and Tip begin to learn a little more about each other and that they can be friends. We laughed at moments and then there were some fun action sequences that had all of us entertained.

This was such a fun film, all the voice actors did great, especially Parsons as Oh (I LOVED Oh!) and today the kids were asking to watch it again, my eldest saying 'it was so entertaining!'. A great family film and one I can't wait to watch again.

This is the wedding of the summer as celebrated actress Eve Wilder prepares to marry the renowned English writer Harold Alcott in the presence of both of their families, including their grown kids and a rock-star mum and Eve's ex-husband, fellow actor, Laurence Darling.Over the wedding weekend, deep in the Hamptons, both families get to know each other, leading to surprising results that spans each generation. Aided by some special ... more...