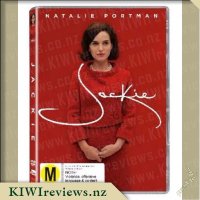 Disclosure StatementFULL DISCLOSURE: A number of units of this product have, at some time, been supplied to KIWIreviews by the company for the purposes of unbiased, independent reviews. No fee was accepted by KIWIreviews or the reviewers themselves - these are genuine, unpaid consumer reviews.
Available:
26th April 2017

After her husband's assassination, Jackie Kennedy's (Natalie Portman) world is completely shattered. Traumatized and reeling with grief, over the course of the next week she must confront the unimaginable: consoling their two young children, vacating the home she painstakingly restored, and planning her husband's funeral. Jackie quickly realizes that the next seven days will determine how history will define her husband's legacy - and how she herself will be remembered. This was a disappointing watch. According to Google, there was around three days between the assassination of JFK and his burial, and basing an entire film around one person's view of those 3 days unfortunately creates a very dry watch.

The film is based around an "interview" between Jackie Kennedy and a journalist, as they recount the assassination and the days that immediately followed. The entire interview style was both useful and a hindrance to the film; it allowed an extra comparison between how Jackie acts, and how she allows herself to be seen, both during the emotional turmoil and after the immediacy of it has passed. On the other hand, it also took us away from being a first hand account, to almost being hearsay. When you go from watching an event happen, to watching how a character tells us it happens, while also multiple times mentioning that she will be editing any transcripts, it's hard to take it as seriously.

The film is oddly shot, with odd transitions and dialogue almost cropped out as the camera changes angles and jumps through time. It makes it a little harder to follow, but does give it a more aged, period-piece feel. There were several recreations of vintage footage which was a nice touch, though I would have preferred to have seen the actual footage, so I could properly see how well cast the actors and actresses were.

Largely, the film skates by with little to no dialogue. Hoping to express itself purely by Portman's actions and acting ability. Unfortunately, what can often be considered dignity can also come across as emotionless. And what one try to show as determination and love, could come across as irrational and stubborn. In both of these cases, Natalie Portman really struggled to sell the performance. Every scene seemed to share equal importance no matter what was occurring, which took away from moments that should have endeared us to Jackie.

I would have preferred a much more streamlined script. straight-forward chronologically; remove the journalist interviews, and the time skipping, so that the viewers can properly gauge how the emotions changed over time, how she coped with such immense loss in the public's eye.

Ultimately, the film bored me. Portman came off stone-faced and unlikable, and the most emotional scenes (warning there are some very graphic shots in this film) came off flat and lacked authenticity. The film really needed a larger perspective with better support from the rest of the cast, instead we have an inconsistent performance that leads a lot to be desired.