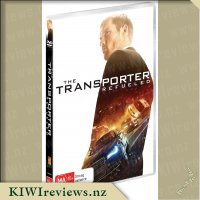 Ed Skrein assumes the iconic role of Frank Martin. We meet the younger version of the former special-ops mercenary, now an independent agent contracted to transport classified packages for questionable people. When Frank's father pays him a visit their bonding weekend is interrupted by the plans of femme-fatale, Anna, and her three seductive sidekicks.

Frank must use his covert expertise and knowledge of fast cars, fast driving and fast women in an attempt to outrun a sinister Russian kingpin. This was always going to be a hard sell for me. The first Transporter film was the movie that made me believe Jason Statham was the best actor ever. He is the transporter. Even the television series was a hard watch for me seeing Chris Vance filling the role of a slightly younger transporter, so to have them go even younger again with a third actor (Ed Skrein) it was difficult to not compare. So I'm not going to.

The film starts with a glimpse at our villains, stereotypical bad guys, and then jumps forward many years later, to the point that they look so different, that you have to do a separate flashback on every single one, so that you know they are the villains. This jumping forward then having to flashback was a tad irritating to me. It felt like something that could have easily been worked around, and made the film feel less disjointed. But clearly the writers felt it was necessary to have this large time gap.

Our friendly neighbourhood transporter, is a gaunt, rough looking young man, whose fighting style felt too sleek. It was fast and perfect, to the point that it didn't strike me as believable. Much of the fighting was unnecessary, and stretched out, seemingly trying to cover up a thin plot. Predictable at every point, the film was only good if you switch off your brain, and just enjoy the explosions and choreographed dance scenes (sorry, I mean fight scenes).

There were certainly parts of the film that I enjoyed. There were multiple different plot points, and it was still nice to see it all come together, even if I could see it all beforehand. But the overall speed of the film let it down. It starts slow, then goes straight to the top gear, and then stalls for a bit in the middle; at which point I found myself looking at my watch, but the film kept going for another hour or so. With some alterations, this would have made a great film if it was shorter. Leaving less space for unnecessary, unrealistic fighting styles, and superhuman strength when it comes to swinging heavy objects.

The characters overall annoyed me (with the exception of Ray Stevenson playing Frank Martin's father). The women were generally unlikeable due to their lying and methods to acquire the transporter's services. The villains are just stereotypical russian bad guys that foreshadow their weakness early in the film, and the transporter himself was involved in very little transporting (don't even get me started on his bulletproof, unscratchable, undentable cars).

It has action, attractive women, and fast BMWs. The plot felt weak, but it still has a reasonable entertainment value for the first half of the film. After the first act however, I was bored with it, and couldn't wait for it to end. Is it worth a watch? Sure. Will want to watch it a second time? Probably not.