Billy Connolly - Journey to the Edge of the World review 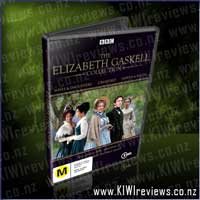 After years as a widower, village doctor Mr Gibson has decided to remarry - something for which his naive daughter, Molly, is wholly unprepared for.

Soon Molly's world is overturned by the arrival of an unwanted stepmother and a bewitching and beautiful stepsister, Cynthia. In spite of their differences , the two girls quickly form a close relationship. The strength of this friendship is soon tested however, when the girls become rivals in love... and matters are further complicated when a dangerous secret emerges from Cynthia's past... with serious consequences for them both.

Cranford is a place governed by etiquette, custom and above all, and intricate network of ladies. It seems that life has always been conducted according to their social rules, but Cranford is on the cusp of change....

For spinsters Deborah Jenkyns, and Matty the town is a hub of intrigue - a handsome new doctor Frank Harrison from London has arrived; a retired Army Captain and his daughters have moved in to a house opposite and the preparations for Lady Ludlow's garden party are underway. Everyone - from charming rogue Dr Marshland to mean Mrs Jamieson and her lap dog - talks, and is talked about, behind closed doors. The town also has it's secrets which are slowly revealed.

As the daughter of a middle-class parson, Margaret Hale has enjoyed a privileged upbringing in rural southern England. But when her father uproots the family, she is forced to adapt to a new life in Milton - a northern mill town in the throes of the industrial revolution.

Margaret is shocked by her new surroundings - the dirt, noise and gruffness of the people of Milton. However, she saves her greatest contempt for the mill-owners. When John Thornton, charismatic proprietor of Marlborough Mills, becomes a 'pupil' of her father, she makes her distaste for this vulgar and uneducated new class abundantly clear.

Over time, Margaret's attitude towards the mill workers begins to change and she joins their workplace struggles against poverty and disease. But will she ever change her view of their employers - in particular, John Thornton who has secretly become her admirer?

I really enjoyed this collection of Elizabeth Gaskell DVD novels. Each of the mini series portrayed the era of the times well. In actual fact i think i would have quite suited living in this era, but i guess we'll never know now! The $99 cost is but a small price to pay for these classic films. A great addition to your collection!

All three series have a common theme - LOVE, small villages, and Doctors. Whether it is finding love for the first time, or marrying for the second, it is a reccurring theme. All three stories heavily involve the village Doctor, and it is he who finds love, with the exception being North and South, where the Doctor is only called to attend Margaret, whom was knocked out with a rock. Most of the actors are involved in all 3 mini-series which goes to show how adaptable they are. There are many well known faces, and a few you will know by name, like Dame Judi Dench, Michael Gambon and Imelda Staunton.

Beware - you need plenty of undisturbed time for these classics, as each mini series goes for at least 4 hours.

Wives and Daughters:
Dr Gibson, the local Doctor, decides he needs to remarry, after years of being a widower. His teenage daughter Molly is completely unprepared for this change of event.

Once he is remarried, Molly finds out she now has a step-sister (Cynthia). At first they do not wish to get along, however they both have a dislike for Cynthia's mother, so they form a close bond through the likeness.

This bond is soon strained by the fact that the girls both fall in love with the same man. Until a secret Cynthia has kept for numerous years comes to light. Will the secret destroy them or make them stronger?

North And South:
This story would have to be the darkest of the three. Dark as in there isn't much happiness involved in the movie at all. It's about the industrial revolution. Margaret's father uproots his family from Southern England, to a small village in Northen England called Milton. This is a huge shock to the system for Margaret as Northerners have completely different attitude and way of life from what she is used to. Margaret finds herself full of hatred towards the Mill owner John Thornton because of the way he treats his workers, but finds her attitude ever changing as he becomes a pupil of her fathers and she learns more and more about why he is who he is today.

Even admitting that, I just had to watch this movie from beginning to the end. With the only really gratifying part at the end. I will not give the game away!

Cranford:
This had to be the most humourous mini series i have seen in a long time. The women of Cranford have such serious demeanours, and yet they convey themselves with humour excellently. Eileen Atkins whom played Miss Deborah Jenkyns was the most stern lady of all, and yet she had me in stitches alot!

This story line had the biggest name line up of all, Dame Judi Dench, Micheal Gambon, Imelda Staunton, as wel as many faces you would recognise but not know by name.

The town of Cranford is abuzz when a new doctor comes to the town. The one thing that has always amazed me in this era, is if you do something wrong, you can be made an outcast quicker than you can say boo. No one will stop and talk to you, or even walk on the same side of the road as you.

If you want a warm and fuzzy feeling with a few hiccups along the way then Cranford is the one to watch! I will definitely be watching this again!

The Borrowers are four-inch high "little people" who live under the floorboards. When the owner of the house they live in dies and evil realtor Ocious Potter wants to destroy the house to build luxury apartments on its place, they start to fight him with the help of the son of house owner, Pete.