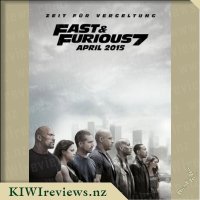 After defeating international terrorist Owen Shaw, Dominic Toretto (Vin Diesel), Brian O'Conner (Paul Walker) and the rest of the crew have separated to return to more normal lives. However, Deckard Shaw (Jason Statham), Owen's older brother, is thirsty for revenge. A slick government agent offers to help Dom and company take care of Shaw in exchange for their help in rescuing a kidnapped computer hacker who has developed a powerful surveillance program.

Well what can you say..... as to be expected the stunts where crazy and totally unrealistic, some of them defy the relms of possibility. It had its humour and cringe moments. Fists where flying as well as the cars and the helicopters. Guns where a plenty and there was a basic story. You had your bad guys and then of cause there is Dom and his crew. There is love, laughter and tears and then there is Paul Walker.

I have been dying to see this movie but at the same time I was really scared as it is Paul's last movie ever and for some reason his death really hit me hard. I found a lot of his scenes where over the top and too touchy feely and I assume they where added after. The funeral scene was extremely eerie and I am not sure his final words where required. But in saying that I loved the way they ended the movie with his sparkly blue eyes and wide smile as he drove off into the sunset. It was very emotional and I had a lump in my throat. They gave him a very fitting tribute considering they could of killed him off at any stage with his crazy script.

I also liked how they finally concluded Tokyo Drift so it finally caught up and made my sense. It was nice to see it come full circle and finally see Han die. But if this is your first Furious movie don't worry you can easily catch up and it will not effect the movie at all. Basically its cars, speed and extremely over the top stunts.

I do enjoy the Fast and the Furious movies and although very sad seeing the end of Brians character it was still a good movie. Jason Statham brought some new life to the series and it was great to see Dom and The Rock get smacked around a little. I am hoping the next movie brings some new characters into play as they need some new blood. I do love how the story is just so silly and you sit there shaking your head because in reality people don't just walk away from head on colusions nor do they fly through the air and land in another building or manage to outrun a falling bus. It is extremely bad but yet so good. This is one of those films that you will either love or hate. For many, the focus is on Paul Walker, who tragically passed away before filming wrapped up, and the film provides a very poignant tribute to him. I have to say kudos to the writers, who managed to work around the loss of an actor during filming, to create a reasonably coherent film. They did a good job all being considered, but the film itself (ignoring this tragic loss) was very convoluted and even more unrealistic.

The 'Fast & Furious' franchise is very much going the way of the 'Avengers' and 'Expendables', where there are too many major actors who are all competing to have face time in the same film. You are left unsure who to focus your attention on and eventually the plot becomes lost, as you inexplicably move from one extended action scene into the next.

Jason Statham and Dwayne 'The Rock' Johnson are the big players that come off best in this film. Vin Diesel and his band of drivers do the same thing that they always do; come up with convoluted plans that require a fleet of exorbitantly priced cars that will be modified beyond belief and trashed. Jason Statham does what he does best. He does minimal work, is hardly present throughout the film, and yet he has the largest presence. The initial confrontation between Jason and Dwayne is by far my favourite part of the film.

That all being said, if you want excitement, this film is good for it, as long as you can switch off the "science" in your brain and replace it with "unrealistic video game physics". It can be a rather fun film. There is no lack of explosions, car racing, drifting, shy diving, fighting, guns, overly muscular/famous men, attractive women or modified vehicles. There is almost as much destruction as the latest 'Superman' film, and even more complex and intricate plans than 'Pulp Fiction' and '12 Monkeys' combined.

But I feel too much emphasis was placed on the tribute to Paul Walker at the end. While I did hit me right in the feels, I felt that it should have been kept separate, instead of being written in as a part of the plot.