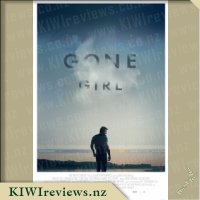 I actually won the book a couple months back and I tried to read it. My intentions where read the book then watch the movie. I am about 60 pages into the book and just couldn't get into it so when the movie finally showed on Sky I jumped at the oportunity to watch it. I have heard so much about this movie but I was still left shocked with the opening scene.... When I think of my wife, I always think of the back of her head. I picture cracking her lovely skull, unspooling her brain, trying to get answers. For the record, when I think of my husband cracking his head open is the last thought I have.

When Amy finds out about Nick having an affair her 'obvious' first thought is 'I know I will kill myself and frame my husband for his murder'. I knew this movie had twists and I knew it was a frame up before watching it but I was still shocked at what happened. I do not understand the way peoples minds work. Never in a million years would I ever think of doing this to my husband no matter what the circumstances. We were both left a little shooken up by the end of the movie.

I would not say the acting is brilliant and Ben Affleck, despite what I had heard felt rather bland and wooden at times and acted as if he had no energy. Even when all fingers where pointed at his character he still didn't fight. My first reaction would be befriend the police and let them know what is happening but instead he alienates himself and hides evidence. The world is watching, candlelight vigils are happening, tv presenters are blaming you, the state has the death penalty and you act all aloof, it just didn't sit right.

I am trying not to give to much away but it has to be said Amy definitely has some 'major' issues. This movie shows the best and the worst of the human race and how easy it is to trick people into beleiving what you want them too. Never in a million years would I have imagined this movie taking the turns that it did. Just shows how powerful the mention of a baby can have woman spitting blood. definitely a psychological thriller.