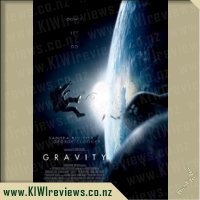 Dr. Ryan Stone (Sandra Bullock) is a brilliant medical engineer on her first shuttle mission, with veteran astronaut Matt Kowalsky (George Clooney) in command of his last flight before retiring.

But on a seemingly routine spacewalk, disaster strikes. The shuttle is destroyed, leaving Stone and Kowalsky completely alone - tethered to nothing but each other and spiraling out into the blackness.

This film was interesting because of the way that it was edited. Visually it was stunning (as you would expect with films based in space), but the real interesting aspect was how it all appeared as if it were all filmed in one shot with one camera. No switching from one view to another, I suppose it kind of mimicked how a satellite itself floats through space.

Sandra Bullock was really an odd choice of actress in my opinion. While I enjoyed the second half (of incredibly convenient space station placements) Sandra Bullocks character was for the most part lacked authenticity, and was not convincing. Clooney was as charming as would be expected and was the most enjoyable part of the film (apart from the beautiful environments.

Knowing the amount of space debris that exist surrounding our atmosphere, this film didn't seem realistic, and the likelihood of such events occurring is so near zero that I really had trouble enjoying it. It was like the writers had to flesh out the film, based on one two lines of plot; the problem, and the solution. It was nothing more than unnecessary filler.

But it is largely a beautiful film to watch, and almost looks straight of a high definition BBC documentary. I wouldn't really aim to watch the film again as a film, but I would certainly turn the sound off and watch the graphics for the first half over and over again.

Visually this movie is an eye orgasm. The scenery is fantastic and the shots of earth are so dreamy and sharp it leaves a lump in your throat. You forget what an amazing planet earth really is. The scene with the Northern Lights was just beautiful as was the sunrise during all the chaos - lets you think "wow what a great last thing to see before you die." I loved seeing the blue ocean and then the vivid green as it scans the planet. I can understand why it won so many awards. Really worth it just for the amazing features this movie offers.

I loved when Ryan (Bullock) was crying and instead of the tear falling straight down just came off her face and floated away, or the scene with the fire looked so picturesque. Unfortunately if it wasn't for your 'eyes' there really wasn't anything else in the movie to hold you to it. It is suspensful but the story falls flat and I found the casting was just wrong. I did not feel anything for Sandra Bullock's character and found her acting really annoying. George Clooney managed to hold his own but over all I think they should have used different people.

Although it is a gripping movie I found my husband and I were talking a bit throughout it saying what we would have done different. There is not a lot of talking and we had to really turn the tv up to hear it as it is one of those quiet movies. It was frustrating when she was running out of oxygen and he insisted that she keep talking, understand it was to keep her calm but it also was using way to much of her air. It has its moments but they are few and far between.

It is a good movie but like I said before more for the visual aspect then for the story. I enjoyed it but wouldn't rush out to watch it again. Although it really would be amazing to be in there position (before all the catastrophe hits) as I would love to see earth from up where gravity does not exist.

After the cataclysmic events in New York with his fellow Avengers, Steve Rogers, aka Captain America (Chris Evans), lives in the nation's capital as he tries to adjust to modern times. An attack on a S.H.I.E.L.D. colleague throws Rogers into a web of intrigue that places the whole world at risk. Joining forces with the Black Widow (Scarlett Johansson) and a new ally, the Falcon, Rogers struggles to expose an ever-widening conspiracy, but he and his team soon come up against an unexpected enemy.