Doctor Who: The Next Doctor review 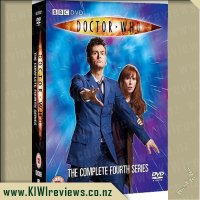 Packed full of guest stars, Series 4 is the best yet!

David Tennant continues as the 10th incarnation of the Doctor, with Catherine Tate (who first appeared in the 2006 Christmas special) joining him as his faithful companion, Donna Noble. Together, the time-travelers traipse through Pompeii the day before its eruption; investigate mysteries with Agatha Christie; and even meet up with the Doc's previous roadie, Rose Tyler (Billie Piper).

More than just sci-fi, Doctor Who is human drama at its most inventive. Featuring all 13 gripping episodes from series four, the 2007 Christmas special and a galaxy of extras, now fans can now own the entire fourth series together on DVD for the first time in this highly collectable specially packaged 6-disc box set, with over 4 hours of extras including commentaries and deleted scenes.

The doctor must learn not to change history, and he does try in Pompeii (for those who know the history it is not easy to leave alone and let things happen and people die) and he does become human for a while, and see how the events unfold. How tempting it would be to stay human as he is lonely and has lived a very long life with lots of incarnations?

I had a good laugh when Donna and the Doctor finally find each other in the beginning and she suddenly decides that she wants to travel with him and see space and what the future holds and see some of history.

I haven't seen any of the behind the scenes footage but would love the deleted scenes and see how the actors burst out laughing at the wrong time.

I would recommend this series to any sci fi lover and kids who understand that the Doctor is not real and no way could you fly through time like that, I think if it was possible then there would be a lot of people wanting to change mistakes as then you would know what to do different but it is good to use some imagination and pretend to be the Doctor on his numerous adventures.

Donna is back!!!! And thus begins season four of Doctor Who.

We start off with the Christmas special and then off we go to Earth where Donna bumps into the Doctor whilst investigating a new weight loss pill (if only it were that easy to shed a kilo or two, but a lot safer of course), then we get to experience Pompeii, the Ood, Sontaran's, the Vashta Nerada and the soon to be infamous River Song. Donna is a good shake up for the Doctor acting more like a concious than a doting companion, making him think about things that little bit more.

There's a good episode that features just the doctor and then we switch it up and have a Donna central episode which shows just how the world would have been had she never met the doctor in the previous years christmas special. The final two parter brings back all his old friends, Martha, Sarah-Jane Smith, Mickey, Rose, Torchwood and even Jacqui to save the Earth (and 26 other planets) from the Daleks. We finally see something a bit more with his severed spare hand and Rose finally gets a bit of closure and feisty Donna gets shown just how important she really is.

The season ends on a sad note, but don't worry, there's another Christmas special, Doctor Who special and a final two parter that brings about the new Doctor, yet to come.