ProdID: 5475 - Remember Me
Developed by Capcom 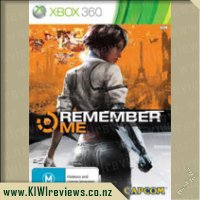 Personal memories can now be digitized, bought, sold and traded. The last remnants of privacy and intimacy have been swept away in what appears to be a logical progression of the explosive growth of social networks at the beginning of the 21st century. The citizens themselves have accepted this surveillance society in exchange for the comfort only smart technology can provide. This memory economy gives immense power over society to just a handful of people.

Remember Me is a 3rd person action adventure where players take on the role of Nilin, a former elite memory hunter with the ability to break into people's minds and steal or even alter their memories. The authorities, fearful of her knowledge and capabilities have arrested Nilin and wiped her memory clean. After her escape from prison, Nilin sets out on a mission to recover her identity, helped by her last and only friend. This search for her past leads to her being hunted by the very people that created this surveillance society.

Speculative, stunning vision of our future - Discover Neo-Paris 2084, where augmented reality and memory digitization have taken control of people's lives.

Play as Nilin, an elite memory hunter with a clouded past - Become the most wanted memory hunter in Neo-Paris and experience the power to break into people's minds to steal their memories. Gain the information you need directly from people's heads, to complete your missions and recover your own memory.

Memory Remix - This innovative new gameplay mechanic allows players to use Nilin's powers and alter parts of people's memories in real-time gameplay. This will change characters' complete perspective on their self-image and the people around them, which can have grave consequences for the world in 2084.

A balanced mix of combat and exploration - Fight your way through the different environments Neo-Paris has to offer, using Nilin's proficiency in martial arts, as both hunter and prey!

I was definitely curious about this game, when given the opportunity to review it. I had never heard of it before, but the story line was original and to have a female lead character seemed quite a change to the usual character types.

At first I was a little confused at the game. It gave pretty much no back story, and very little in the way of a tutorial to show you what to do and where to go, so I died a few times pretty early on. But I soon figured iout where to go, and the reason why there was no back story becomes pretty obvious as the game goes on. The controls are very simple, and give you the opportunity to create your own combos, by choosing which attacks to use, and what abilities you want. The abilities are tied in wit the combos; if you successfully complete a 'health' attack, then you regenerate health, 'power' attacks cause more damage, 'Cooldown' attacks allow you to unleash your ultimate moves.

So you have the opportunity to alter your fighting style in the game at any point. I really suck at combos, so I ended up just changing the simplest on, so that I could button mash, and just change the combo, so that the same buttons would give me different things.

I very much enjoyed the graphics in this game, and they had a very 'Final Fantasy' sort of feel to them. The narrative voice for the lead character Nilin, reminded me a lot of Rhona Mitra, who was in the 'Underworld Awakening' movie, and spoke with a touch of class. There were a variety of new skills to learn that could unlock new ways to access new areas, and it soon became a bit of strategy, and a puzzle, trying to figure out how to unlock doors, and reach people.

The movement in the game requires you to mainly be stealthy,and you end up doing a lot of parkour, climbing up walls, and drainpipes. While this aspect is enjoyable, This is more of a platform game, than an open world, so you can really choose where you want to go. You have to go where it wants you to go. So it's less creative, and more disruptive, as you try to find the one path to follow. I played it on easy, and it gave you constant hints to show you where to go, what ledges to use, but often they would not disappear after I used them, so if I get turned around I would end up going backwards if I followed the hints.

There was really only one real gripe to have with this game; the constant changing of the boss. You would spend a long time finding your target, only to find that you need to go track down someone else. In the end I had to look up the game on the internet to find out how many 'Chapters' the game had (Eight, titled from 0 to 8), so I knew when it was going to be finished. So while I really enjoyed it, that fact that I kept thinking I was finished, but the game would continue and give me another target got a bit annoying in the end.

Overall it was a great game, with a story line that kept me busy for two days straight. This would definitely keep you up all night.

Built upon the foundation established by Souls series creator and Dark Souls II Supervisor, Hidetaka Miyazaki, with development helmed by FromSoftware Director Tomohiro Shibuya, Dark Souls II will feature a new hero, a new storyline, and an unfamiliar world for players to survive in, while delivering the uncompromising challenge and ultimate sense ... more...