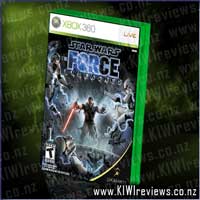 The Star Wars saga will continue in Star Wars: The Force Unleashed, a videogame developed by LucasArts, which casts players as Darth Vader's "Secret Apprentice" and promises to unveil new revelations about the Star Wars galaxy. The expansive story, created under direction from George Lucas, is set during the largely unexplored era between Star Wars: Episode III Revenge of the Sith and Star Wars: Episode IV A New Hope. In it, players will assist the iconic villain in his quest to rid the universe of Jedi - and face decisions that could change the course of their destiny.

As its name implies, The Force Unleashed completely re-imagines the scope and scale of the Force by taking full advantage of newly developed technologies that will be seen and experienced for the first time: Digital Molecular Matter (DMM), by Pixelux Entertainment, and euphoria by NaturalMotion Ltd. Paired with the powerful Havok Physics ™ system, these new technologies create gameplay only possible on the new generation of consoles. DMM incorporates the physical properties of anything in the environment so that everything reacts exactly like it should - wood breaks like wood, glass shatters like glass, plants on the planet Felucia bend like plants on the planet Felucia would, and more. Meanwhile, as a revolutionary behavioral-simulation engine, euphoria enables interactive characters to move, act and even think like actual human beings, adapting their behavior on the fly and resulting in a different payoff every single time.

Features:
• During the period between Episodes III and IV, players hunt Jedi in the role of Darth Vader's Secret Apprentice.
• Unleash and upgrade the Secret Apprentice's four core Force powers - Force push, grip, repulse and lightning - throughout the course of the game, and combine them for ultra-destructive, never-before-seen combos.
• Examples of unleashing the Force in ways never thought possible:
• The Secret Apprentice won't just Force push enemies into walls - he'll Force push enemies through walls.
• The Secret Apprentice won't just Force grip foes to throw them aside - he'll Force grip them in midair, zap them with lightning, then drop them to the ground to explode like a bomb.
• In addition to new adversaries created just for the game, such as fugitive Jedi and Force-sensitive Felucians, players will also confront and associate with familiar faces from the Star Wars films, including Darth Vader.

This has to be the best Star Wars video game to date, it certainly is in terms of the force abilities you can wield and how you use them. This incarnation of the Star Wars genre is a great mix between a Third Person Shooter/Hack 'n' Slash and a RPG (although there is more emphasis on the TPS side of things).

The story behind the game is your usual fare, but is well incorporated and the voice acting is well done as well. As stated in the burb above you have the usual suspect such as Darth Vader, the Emperor and various Storm Troopers (plus one or two other cameos), you also have a huge range of new foes. These foes range from the standard cannon fodder through to the kind where you just look at the screen thinking, okay this could be interesting.

If this game is any indication of the direction that LucasArts are looking at taking the Star Wars franchise then, the future is looking very good indeed.

From when this games opens to the last scene closes and the last enemy is dead, it feels like a real rollercoaster. Some of the moves are hard to master, but it is all part of the charm, for all those that remember the original Star Wars series on the pc, it is a great follow on from the series.
With all great games, for me playability is king, and this does a great job. All in all this game rates well.