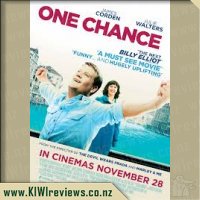 From the Director of The Devil Wears Prada, One Chance is the remarkable and inspirational true story of Paul Potts, a shy, bullied shop assistant by day and an amateur opera singer by night. Paul became an instant YouTube phenomenon after being chosen by Simon Cowell for 'Britain's Got Talent.' Wowing audiences worldwide with his phenomenal voice, Paul went on to win the show and the hearts of millions. BAFTA Award ® winner JAMES CORDEN (Can A Song Save Your Life?) delivers the performance of his career as Paul Potts and is supported by an acclaimed ensemble cast that includes JULIE WALTER (Mamma Mia!), MACKENZIE CROOK (The Pirates of the Caribbean), COLM MEANEY (Get Him To The Greek), JEMIMA ROOPER (Kinky Boots) and rising star ALEXANDRA ROACH
(The Iron Lady).

I saw a trailer for One Chance a couple of months ago and thought that it looked like a fun movie so was eager to get this on DVD to review.

One Chance is based upon the real life story of Paul Potts, a man who was horribly bullied growing up and took solace in opera music. He has little to no support from his father but plenty from his mother, some support from his friend/co-worker and when they finally meet face to face, despite a bump or two on the road, the support of the love of his life. The story is nothing new, but who doesn't love an underdog story? The characters are very much cliched and as such none of them really stand out.

Some of the scenery is gorgeous as is it was shot in Venice for the relevant scenes, and then the shots in London, meh, not so fab but that suits the movie fine. The acting is good but as I said above, nothing stands out, and my favourite character wasn't the lead but his mother played by Julie Walter. It's interesting to read online that Corden did try to get his voice to an opera standard but he didn't manage to and thus the singing we hear is Paul Potts, another thing they did well is used actual footage from Potts original audition and edited it into the movie.

The movie feels a little slow, there are a few times where the movie drags on, yes it is meant to be the tale of how he got to worldwide fame but there seems to be a bit too long taken in parts. The characters are pretty one dimensional and the father was too predictable, making fun of his son along with others till proven wrong and then finally stands up for his son... Still, produced an "Finally!" from my mother and I, but my husband didn't get to see it as he gave up halfway through the movie.

The movie was a nice little feel good watch, but it just wasn't anything great and I'm not really too bothered about watching it again any time soon.

Take a trip down the aisle you'll never forget

Academy Award winner Meryl Streep leads the cast of 'Mamma Mia!', the screen version of the worldwide stage musical phenomenon featuring the songs of ABBA. Streep stars as Donna, the mother to Sophie, who's on a quest to discover the identity of her father on the eve of ... more...