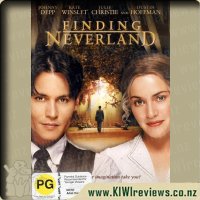 He is drawn to the mother and her boys whom he entertains with his soaring imagination and with whom he plays games (including pirates) in the park. The story takes us from this first inspiration for his timeless tale to the play's premiere - a night that would change not only Barrie's life but also the lives of everyone close to him.

Bring the tissues for this one and plenty of them.

This is not a Peter Pan movie, well, it is but it isn't. Finding Neverland tells us the story of J.M. Barrie and how he came to create the world famous and timeless movie that is Peter Pan. Exploring the major theme of Barrie's play (that of a boy who never grows up), Finding Neverland refrains from condemning grown-ups, but exalts the wild magic one can enjoy as a kid. For James, who had to deal with his family's reticence upon the death of his brother, the real tragedy occurs when a child is forced to grow up too fast.

The film does move at a snail's pace but it suits the movie and to go too fast would be to take away from the beauty and feeling of this movie and you wouldn't cry if it had gone too fast. As for the acting, it is wonderful. Depp is understated and gallant, Kate Winslet is lovely and tragic, and they're both better than I've ever seen them. The boys playing the Davis kids are a lot of fun to watch and play their dramatic parts perfectly.

This is a movie full of heart and a great movie to watch for any fan of the boy who never grew up.

Score: 8.3
Product reviews for listing 8314: On The Basis Of Sex
Directed by Mimi Leder

All rise for the fight of the century!

Inspired by the powerful true story of Ruth Bader Ginsburg (Felicity Jones), On The Basis Of Sex depicts a struggling young attorney and new mother facing adversity in her fight for equal rights. When Ruth takes on a ground-breaking case, she knows the outcome could alter the courts' view of gender discrimination. Ruth teams up with her husband Martin Ginsburg (Armie Hammer) to fight the case that catapults her into becoming one of the most important public figures of our time.