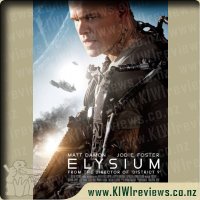 In the year 2154, two classes of people exist: the very wealthy, who live on a pristine man-made space station called Elysium, and the rest, who live on an overpopulated, ruined Earth. Secretary Delacourt (Jodie Foster) will stop at nothing to preserve the luxurious lifestyle of the citizens of Elysium - but that doesn't stop the people of Earth from trying to get in by any means they can. Max (Matt Damon) agrees to take on a life threatening mission, one that could bring equality to these polarized worlds.

I always wonder why they continue to give Matt Damon these types of roles, While he managed to pull off the Jason Bourne trilogy, he has never been the most emotional of actors. Most of the time he looks confused as if he doesn't understand what it is that he is meant to be doing.

This is a rehashed "suppressed poor taking back their rights from the privileged few" movie. Having part of it occurring in space, does give it a slightly different feeling, but also opens up the plot to a lot of issues. Matt Damon's character's crush really offers little addition to the movie, and it begins to feel like a video game where you have to protect and escort the computer player, who consistently gets captured and runs the wrong way.

The best character was Kruger, played by Sharlto Copley, who exhibited the most depth, and played the role of the rogue operative incredibly well. His role in this film was the saving grace that kept me watching. The trailer had me expecting some high-end technological advances in weaponry, but that had been deceiving, as will become apparent.

The flashbacks were unnecessary, but the picture quality was very high, and allowed a stark contrast between those that were well off, and those in the slums.

I wasn't really interested in seeing Elysium as to me it feels like the same old story just in a new skin, but hubby wanted to, more for the gadgets and weaponry than anything so we borrowed it from the video store.

Earth is a crappy place to live, you get sick and you die, up on Elysium you can be cured from anything within seconds. When Max gets radiation poisoning and is set to die from it he ends up trying to reach Elysium (picture it as those in South America trying to cross the boarder to reach a better life), he ends up getting information inside his mind that could either give one person complete control over Elysium or it could save those on Earth.

The special effects were good, the weaponry was rather brutal in some cases so if you prefer not to watch bodies go kaboom! then don't watch this film. The acting was good, however the only character that I really felt was real is a nasty criminal hired by the Secretary of Elysium, he was brilliant. Whilst this is a tried and true narrative I did like it, but no more than I expected to.

I am in no hurry to watch this again but I know that hubby is keen to buy it.

Born with a gift he didn't want, the ability to clearly recognize the half-breed angels and demons that walk the earth in human skin, Constantine was driven to take his own life to escape the tormenting clarity of his vision. But he failed. Resuscitated against his will, he found himself cast back into the land of the living. Now, marked as an attempted suicide with a temporary lease on ... more...