ProdID: 443 - Under the Tuscan Sun
Directed by Audrey Wells 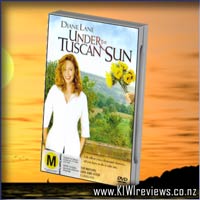 Disclosure StatementFULL DISCLOSURE: A number of units of this product have, at some time, been supplied to KIWIreviews by the company for the purposes of unbiased, independent reviews. No fee was accepted by KIWIreviews or the reviewers themselves - these are genuine, unpaid consumer reviews.
Available:
25th November 2004

Under the Tuscan Sun product reviews

San Francisco writer Frances Mayes is in a real funk when a good friend offers her ten days in Tuscany. Not wanting to go, Frances summons all her courage and packs her bags.

Once in Tuscany, she impulsively buys a run-down villa, plunging herself into a life-changing adventure filled with unexpected surprises, friendship and romance.

This movie was on television recently and I put it on to watch I love romantic comedies where as my partner not so much so as he was asleep on the couch I got away with putting it on. It was such a nice break from the Crime and Investigation chanel I would have to say and I really loved the movie.

It was on quite late and I was tired but I had to watch it right to the end as I was gripped on the story line to find out whether she would find the man of her dreams. I loved the storyline where Frances gets a divorce from her husband and ends up buying a run down villa in Tuscany. There are plenty of funny moments in the movie but it is definitely more of a romance than a comedy which I for one really enjoyed.

The movie shows her that love can be found in all different places and although she dreams of having a husband and kids she finds a whole different family all of her own which are just as good.

Romantic Comedy?! Why on earth would I - a self-confessed Sci-Fi and Action Movie junkie - ever want to watch a romantic comedy?!

Simple... because it's a great movie! If you have ever felt emotionally hollow inside and don't know where to turn for a way out of the pit you're in... this is a great movie for you to watch. The lead character couldn't really get any further lost, drifting on the ocean of 'sh*t-happens' - but finds that when you stop looking, just lie down and relax, you'll find your ladybugs. (You'll understand that during the movie.)

I found many pearls of wisdom throughout the movie, and a bit of an eye-opening introspection too. A very thought-provoking movie indeed.

The supporting characters are rich, deep, clear and sharp, and despite having a 'filling in the background' role, are not just wallpaper-people. They play a very significant role in the development of Frances' soul-journey. Without every single one of them, this movie would not, could not, be anywhere near as good as it is.

Overall, I will be adding this to my collection, in the section of 'rare gems' that include titles such as "A Walk in the Clouds", and "A Bed of Roses".

Unlimited funds have allowed Diana (McCarthy) to live it up on the outskirts of Orlando. There's only one glitch: she's financing her shopping sprees with an ID stolen from Sandy Patterson (Bateman), an accounts rep who lives halfway across the U.S.

With only one week to hunt down the con artist before his world implodes, the real Sandy Patterson is forced to extreme measures to clear his name