« The Wiggles - You Make Me Feel Like Dancing review 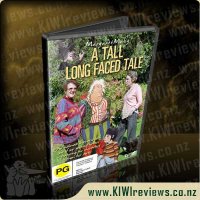 Margaret Mahy is famous for her children's and young adult books and has received many literary accolades including the Hans Christian Andersen Award in 2006 - the world's most prestigious acknowledgement for excellence in children's writing. But there was much more to Margaret Mahy than that.

I won this DVD as part of a prize pack at Christmas time, and I was stoked. I am a big fan of Margaret Mahy. Having grown up with her story books, and the fact that her writings grew with me. Even as a teenager I enjoyed her writing. My memory of her is of a friendly, extroverted lady in a rainbow wig, and I think most New Zealanders would say the same. This DVD is a treasure, because its a glimpse into the author's life and her writing process.

You get to know a little bit about her personal life and how she got into writing. Its not too revealing (at least I didn't think so), but you know she was a single mum and how she fell into writing stories. She talks about her parents and them inspiring a few of her stories as well, especially her father. I really liked the way the questions were posed to her and how relaxed she is in her answers. Its like a nice conversation over a cuppa.

Throughout the DVD interview, characters from her various stories pop up. Either as animations, or as ghostly figures phasing in and out. Its neat to see them ask her questions about how she imagined them, and what made her think of them. I would caution parents that there is a little bit of female nudity in the DVD. I didn't realise and so my daughter was watching at that point. From my point of view the book they were referring to seemed to be about sexual re-awakening. So for some parents that would be not a good topic for their children to view. My daughter didn't really get what was happening and only asked about the tattoos, so it wasn't a big deal for me.