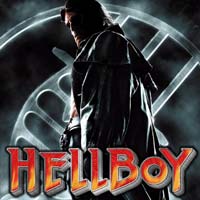 Hidden from the very society that they protect, they stand as the key line of defense against an evil madman who seeks to reclaim Hellboy to the dark side and use his powers to destroy mankind.

I watched this, mainly due to my brother and cousins looking forward to it, and I have a tendency to like similar things to them.

One thing I can say, is that Ron Perlman looked AWESOME as Hellboy, and it was great to see John Hurt (love all his roles that I have seen so far).

I did enjoy this movie, the first time anyways. The second time that I watched it, I liked it, but it fell a little flat for me. The next time I saw it, it was playing on TV, one of their 'blockbuster' showings. While I did start to watch it, it didn't hook me in enough to want to stick it out through the ads, and so I ended up missing at least half of the movie due to channel surfing.

All in all it is a good film, the first time at least. It doesn't get any better the more you watch it. The special affects are good. But it's not a film I've ever been in a rush to own, despite us owning #2

I also was looking forward to this movie, mainly because the trailers that were shown for it were pretty good. Unfortunately, I was soon to find out that, as usual, they had taken the best-of-the-best-bits and stuck them together to impress.

Unlike the previous reviewer, I didn't have any knowledge of the Dark Horse comic character, have never read any H.P. Lovecraft, so don't know who this 'Cthullu' guy is.

As a special effects movie it was fairly good, but not quite good enough to stop the storyline from falling flat during the middle third of the movie.

I was really looking forward to adding this movie to my DVD collection, and may still, but only if it happens to be on sale.

Needless to say not too impressed really.

Ah, the mysterious agency that has the sole purpose of over-hyping things to make us part with our hard-earned cash has been at work again, this time on the 'Hellboy' project.

I was dead-keen to go see this movie, after hearing amazing things about the Dark Horse comic of the same name, and seeing some truely stunning trailers.

So, after a last-minute dash to arrange transport for the group of us, and some not-so-nice dealings with the cinema attendant who had issues with us complaining about their proceedures for dealing with reserved seats for caregivers of wheelchair-bound patrons, we sat down and waited through the adverts.

The movie, well, I'm not going to give away any of the plot, but I shall make some comments on it... firstly, it strongly reminded me of H.P. Lovecrafts "Cthullu" stories. This is not too surprising, since there are some uncanny connections between Lovecraft's works and the efforts of the Nazi's secret dark-magic research teams during WW1. All too similar in the wrong ways.

There are some continuity errors in the movie, such as one scene where they obviously flipped the film over so Hellboy walked into the room with his stone hand on the wrong arm (Oh so stupid, people), and the final scene raises some questions about the resurrection abilities of a nasty critter.

Overall... the score says it all. It was an OK movie, yet another Special Effects hit, but the storyline just felt flat. There's no other way to describe it.

Believing they have left behind shadowy figures from their past, newlyweds Christian and Ana fully embrace an inextricable connection and shared life of luxury. But just as she steps into her role as Mrs Grey and he relaxes into an unfamiliar stability, new threats could jeopardise their happy ending before it even begins.