« Out of Bed, Fred review 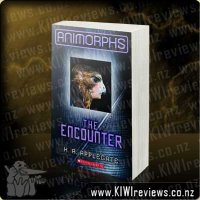 When he discovers an important Yeerk secret, Tobias knows he has to do everything in his power to destroy it. But to do so, he'll have to contend with a part of himself that's wrestling for control. A part that isn't human.

When I found out that this book had arrived, I was jumping with joy! While I was struggling to do up the reviews for some other books, I was afraid that this book was going to be sent away, and I really didn't want that to happen, because after reading the preview of this in book 2, I was anxiously waiting for this one to arrive!

The cover was great, it took me a bit to try and get a full view of the lenticular artwork, and I had to tilt the book almost flat to get a full view of the start of the morph. The story flowed well, it was almost entirely different from the other books, but it still didn't lose the high level of action and excitement as the others. I was a little worried at some points; my heart rate actually rose!

I was most frightened when the Animorphs almost got trapped in their animal forms, my heart was beating against my chest like it was trying the break out, but it was a good thing that the bad part died away. I'm very tempted to read this book again sometime, I still enjoyed it even after all the sad and frightening parts, and those bits were the only parts I disliked a little.

I would say that this book is okay for people 8-18, there were hardly any disgusting bits, so some younger kids wouldn't nearly throw up if they read this book. This is certainly a great book for kids to read on days when they want to relax, because I nearly lost track of the world around me while I had my nose buried in the pages. Enjoy!

London, 1889. Oscar Wilde, celebrated poet, wit, playwright and raconteur, is the literary sensation of his age. All Europe lies at his feet. Yet when he chances upon the naked corpse of sixteen-year-old Billy Wood, posed by candlelight in a dark and stifling upstairs room, he cannot ignore the brutal murder. With the help of fellow author Arthur Conan Doyle, he sets out to solve the crime - and it is Wilde's peculiar genius and his ... more...