Home > Categories > Books > Fantasy > A Song of Ice and Fire 4: A Feast for Crows review 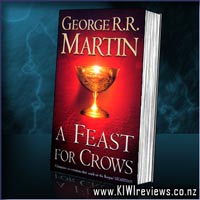 A Song of Ice and Fire 4: A Feast for Crows product reviews

Crows will fight over a dead man's flesh, and kill each other for his eyes.

Bloodthirsty, treacherous and cunning, the Lannisters are in power on the Iron Throne in the name of the boy-king Tommen. But with fear and deceit in the air, their enemies are poised to strike. The Martells of Dorne seek vengance for their dead and the heir of dead King Balon of the Iron Isles, Euron Crow's Eye, is as black a pirate as ever raised a sail.

Across the war-torn landscape of the Seven Kingdoms, the daughter of Lord Selwyn of Tarth, called Brienne the Beauty in mockery of her great strength, seeks the late king's widow Sansa Stark. She promised the girl's dead mother to protect her from the wrath of Queen Cersei, Tommen's power-hungry mother. Meanwhile, apprentice Maester Samwell Tarly brings a mysterious babe-in-arms south to the Citadel from the cruel frozen north where the sinister Others threaten the Wall.

'A Feast for Crows' brings to life dark magic, complex political intrigue and horrific bloodshed. Against a backdrop of incest and fratricide, alchemy and murder, victory may go to the men and women possessed of the coldest steel... and the coldest hearts.

Unlike the first books in the series, A Feast for Crows only covers half the story lines (this is explained by the author as needing to happen because the book just got too big) so not all the characters in the previous books make an appearance. Even though some of my favourites weren't mentioned at all I hardly noticed as the other story lines kept me busy enough. The Dornish storyline was a little droll but I expect that it will be really important in the coming books. .
As with the other books this one is full of love, death, betrayal and unexpected twists. There is not quite the same level of bloodthirsty violence that the previous books gave us but this is replaced with a lot more character development - both of existing and new characters.
Martin must have an amazing memory because there are so many intricate details that are woven into the many different story lines that at times I found myself having to refer to the handy family trees that are at the back of the book. Normally I would think this level of detail would be annoying and I would give up but this book, as with others in the series, was very hard to put down.
For prospective readers I would say that you would need to read the series in order. I can't imagine that this would work as a standalone book very well and even if it did you would really be missing out on some of the best fantasy books ever written. Also try not to promise your time to anyone when you are planning on starting this - you will end up disappointing them!