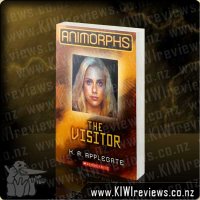 We can't tell you who we are. Or where we live. It's too risky, and we've got to be careful. But everyone is in danger. Yeah, even you.

If someone told you Earth was under a secret invasion, what would you think? Rachel had a hard time believing it, even after she and her friends saw what they saw - and received an incredible power to become any animal they touch.

Rachel knew they were in danger from the start, so when it's suggested that they use their new powers to spy on some of their enemies, she rises to the challenge. But when she discovers what they'll have to do to win, will it be more than Rachel can handle?

Okay, the first thing I have to say is that my expectations on this book have been extremely exceeded, this was better than book one, "The Invasion". I liked the way that at the very beginning of the book one of the five "Animorph" kids, in this case a girl named Rachel, introduces him/herself so you know who the first-person view of the writing is coming from, it really saves a lot of confusion.

The cover was okay, not as exciting as the lenticular print on the first book, but the artwork was still a little interesting. The storyline flowed well, and boy, was it convincing! Between you and me, I was rather worried at the end part, for Rachel (the kid I mentioned earlier) was in a bad situation, and I was holding my breath in anxiousness, but luckily the situation became less worrying and relief came back to me.

The price is good, it's a little on the "high" side, but it's understandable since I'm betting the lenticular picture and the publishing costs weren't cheap. Once again, I would say that this would be good for 10-18 year-olds because of the "ew" factor, but I think we can take it as a given that all the other new Animorph books are going to have the same age-group.

I really hope I can get my hands on the next book, because after reading the preview at the back of "The Visitor" I'm extremely curious about what's going to happen next. I hope you enjoy this book, because even though I loved it, all people aren't the same. Have fun reading!

Now known as the Dragon Riders, Rip and Mei are stuck in a land with bandit bullies, spying firebugs and warring dragon clans - while being followed everywhere by a grumpy dragon who owes them a ... more...