« The Unicorne Files 3: A Crown of Dragons review 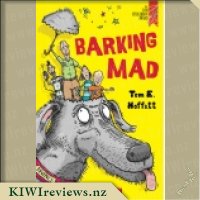 At first, Fingers refuses to believe that his Granddad has gone BARKING MAD! But what straight-thinking grown-up goes around licking the postman, growling like a dog and chasing hospital security guards up trees?

When Fingers and his sister Sally discover a bizarre machine in Granddad's workshop, mix-ups turn into mind-swapping madness - one look at Granddad's dog DaVinci is proof of that! I thought that Miss Four would be too young for this book - I had arrived with it thinking that Mr Seven would like it - but she took one look at the cover and shrieked with laughter. She said it must be about a teapot dog! I could not quite understand how she figured that, unless it was the sight of the people standing in the dog's head and holding up the top of his head as though it were a lid - but it did not seem to matter to her. On the strength of that one picture, she insisted that I read the book to her. RIGHT NOW!

We took a little time to read it - we had to stop each time there was a picture and examine it - but that was ok; we made it last over several days and each time we read the next bit, we talked about what had happened last time. She loved the idea of a grand-dad who might bite people and generally behave like a dog; in fact she wished her own grandfathers would do something like that too as it would be very funny.

As we got into the book and Miss Four realised that Grand-dad had actually turned into a dog and was not mad at all, she became more and more excited. There were times when the story-line was just a little beyond her, but when that happened we stopped and did a recap. There is no harm in a book being challenging for a child to understand; it encourages them to ask questions and to really think about what they are reading. She is starting school shortly; in another year or so she will probably be able to read it on her own, and will enjoy it all the more.

Of the pictures, her favourite was the one of Grand-dad pulling the guard's trousers down with his teeth and leaving the poor man hanging from a branch in just his underwear. (There was a short break in the story here when Miss Four realised that the undies were pink so she had to go and find a pencil to colour them before we could continue. The colouring was not very successful from an adult's point of view as the undies were already shaded, but she was more than satisfied with the result!)

The other aspect of the book that appealed to her preschool sense of humour was the way Grand-dad kept burping - just as a dog might do. Bodily functions and their related sounds are always good for a laugh, and Miss Four tried to burp too to show that she was just as good as Grand-dad!

On the whole, we both enjoyed the book. Mr Seven joined us for an occasional session but we were going too slowly for him. He said he would prefer to read it himself after we were done as it sounded pretty funny. However I did notice that he would pop up whenever we were both laughing at something and ask what was happening now in the story! When last seen, he had taken the book, gone into his room, and curled up to read it himself.

I was really pleased to be able to give this book to my Miss Eight as she is a bit dog obsessed at the moment so I thought it would definitely appeal to her.
I loved the front cover as the illustration had me wondering what the story was all about so it definitely piqued my interest and had me wanting to read it. Miss eight got to it first though and enjoyed it so much she read it in one sitting.

Miss Eight writes "It was really funny when Sally and Fingers (Sally's brother) got Granddads mind swapping machine and switched minds so they were if different bodies. Sally was in Fingers Body and Fingers in Sally's body. Granddad then swapped minds with the dog and the whole story got a bit crazy with Jesus the security guard swapping his brain as well. I laughed a lot when I was reading this as it was very funny. At the end it was all okay again and Sally and fingers mum never found out so that that was good." Miss Eight enjoyed the book so much she read it twice so I think that makes its a success for her and every time she talks about it she laughs.

This is a great story and really well written for the age eight or nine year old age group to appeal to both girls and boys. the book has some great black and white illustrations through out which are really well done also. It is written in the first person from Fingers view point which might make it even more appealing to boys actually than girls. Overall though a really well written and very funny book. I can definitely recommend this and the book would make a great stocking stuffer with Christmas coming up.

Discover all the foul facts about the cut-throat Celts, including why weird Celt warriors fought with no clothes on, how they preserved their enemies' brains, and why they laughed at funerals.