Boy vs Beast - Battle of the Worlds review 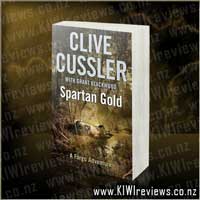 Thousands of years ago, the mighty Persian king Xerxes the Great was said to have raided the Treasury at Delphi, carrying away two solid gold pillars as a tribute to his glory. In 1800, while crossing the Pennine Alps, Napoleon Bonaparte and his army stumble across the pillars.

Unable to transport them, Napoleon created an inscrutable map on the labels of twelve bottles of rare wine. When Napoleon dies, the bottles disappear - and the gold pillars are lost once again. Treasure-hunters Sam and Remi Fargo are exploring the Great Pocomoke Swamp in Delaware when they are shocked to discover a German U-boat. Inside, they find a bottle taken from Napoleon's 'lost cellar'.

Fascinated, the Fargos set out to find the rest of the collection. But another connoisseur of sorts has been looking for the bottle they've just found. Not for the wine. He wants what the bottle may lead to. For he is Hadeon Bondaruk - a half-Russian, half-Persian millionaire - and he claims descent from King Xerxes himself.

And the treasure will be his, no matter what...

I really wasn't too sure how to take this one... it seemed to be a more adult version of "The 39 Clues" crossed with "Bones", wrapped up in a single book. Instead of siblings Dan and Amy, we have a husband-&-wife team backed by a brilliant, if somewhat eclectic, team of researchers back at base. It's Mr and Mrs Indiana Jones if you will.

On a routine swamp-walk, they discover an old Nazi submarine, stranded and trapped in a place it never should have gone. As a complete sideline, they are put on to the trail of a dozen lost bottles of wine from Napoleon's Lost Cellar... which contain within them the clues to a treasure hunt like you wouldn't believe. As usual, the good guys are plagued by the bad guys, who are backed by a megalomaniac rich guy with an ego the size of the continental US.

As usual, they win out over amazing odds stacked against them, but they do it with such style, and more than a small amount of MacGyver-inspired one-the-spot engineering (thanks to the lead male protagonist being, of all things, a proficient engineer and bodger). Regardless of the corny aspect, this is an encouraging start to Cussler's newest story franchise. Honestly, I don't know how the man manages to keep 5 different universes going in his head!

Overall, though it can come across a little cheesy in places, this has all the thrills and spills of a good 'treasure hunter' story but still in a very easy to read style that will appeal to all the existing Cussler fans out there. if you have enjoyed any of his previous titles, then you should warm to this one very quickly.

Way out in the furthest part of the known world, a tiny stronghold exists all on its own, cut off from the rest of human-kin by monsters that lurk beneath the Snow Sea.

There, a little boy called Ash waits for the return of his parents, singing a forbidden lullaby to remind him of them... and doing his best to avoid his very, VERY grumpy yeti guardian, Tobu.

But life is about to get a whole lot more crazy-adventurous for ... more...