ProdID: 3317 - The Thief
Written by Clive Cussler and Justin Scott 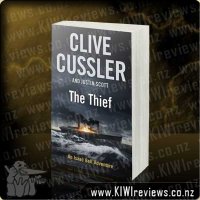 Investigator Isaac Bell is on the trail of a ruthless espionage agent.

On the ocean liner Mauretania, two European scientists with a dramatic new invention are barely rescued from abduction by the Van Dorn Detective Agency's intrepid chief investigator, Isaac Bell. Unfortunately, they are not so lucky the second time. The thugs attack again - and this time one of the scientists dies. What are they holding that is so precious? Only something which will revolutionize business and popular culture - and perhaps something more.

For war clouds are looming, and a ruthless espionage agent has spotted a priceless opportunity to give the Germans an edge. It is up to Isaac Bell to figure out who he is, what he is up to, and stop him, but he may already be too late... and the future of the world may just hang in the balance.

Back on form, this is the next worthy successor to the Isaac Bell sagas!

It is said that no true law enforcer ever goes on holiday. Though they try, crime always seems to find them... this theme is taken to the high seas once again in this typhoon of a tale from Cussler and Scott.

Cruising from England back to America, Isaac Bell and his compadre Archie Abbott, are witness to, and foilers of, an attempted abduction that makes no apparent sense at the time. Trusting his instincts, Bell decides to chaperone the two almost-abductees and see to it they reach American soil intact... alas, as is the way of such tales, this proves to be far more of a mission than anticipated... especially when it involves a man who can apparently vanish in mid-air, two rival gangs, a pair of tight-lipped scientists, and an invention that could be either an entertainment, or a devastating weapon of war - depending on how you plan to use it.

Full of twists and turns - the greater majority utterly unpredictable but obvious in hindsight - and tension the likes of which you would have come to expect from a Cussler tale, this is a wonderful way to pass a few quiet evenings curled up in bed before slumber. Keeping in tone with the global events of the era, we see "evil Nazis", "Heroic Americans", "Violent Drunken Irish" and "Sneaky Brits" abounding... stereotyping of the worst kind but totally the character of the times the story is set in.

I was particularly taken with the interpretation of the motives behind the German contingent in this story - while fantasy in it's truest sense, it none the less had an inner-continuity that kept it from falling over the line from unbelievable into utterly ridiculous.

Overall, one of the best yet from these two gentlemen authors. I admit to being less of a fan of the Isaac Bell series - only because historical drama is not my forte - than of his other franchises, but this particular tale did capture me very quickly, and thoroughly. I often found myself still sitting on the couch reading long after my legs had given up and gone to sleep of their own accord - much to my chagrin, and the entertainment of my youngest son, when I attempted to depart for locations elsewhere.