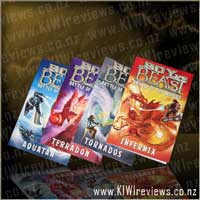 Boy vs Beast - Battle of the Worlds product reviews

Only a wall divides Earth from the Beasts of Beastium.

Only a boy and his dogbot defend the wall and protect Earth.

Kai Masters is a border-guard whose job it is to keep earth safe from the beasts that rage outside its gates. I found the series rather intense, fast-paced and easy to read. I also thought the comic strips inside each of the books were cool as I absolutely LOVE comics.

When my dad told me about the boy vs. beast series some little voice inside my head was screaming "I want to read these books now!", and not surprisingly they turned out to be worth waiting for.

After reading the books I think they are aimed at an age group of 8 to 15 because anyone that would lose interest in them. Book #3, Infernix, was the best one out of the series, I think, because it was the most fast paced book, however book #2, Terradon, was probably the slowest one out of the four, but I still found it reasonably enjoyable.

I think that my favourite character was Kai's dogbot BC because I was quite fond of him, and I liked the cool things he did and the awesome upgrades he got, like the ability to shoot lasers from his eyes.

I thought the books were a nice quick read and it only took me an hour or so to read one of them. Boy vs. Beast is a series I'm sure you'll love, so get them at your nearest bookstore today.

OK, for a start I have to clarify... these books read as though aimed at the 5-7 year olds, or a 'reluctant 8-9 year old reader' market... the sentences are very short - usually less than 6 words each, and the pages usually have 1-3 illustrations on them to provide something for the image-cued learners.

The thing I liked about all the books was that there were usually at least two battle scenes, but the 'big baddie' battle scene was usually rendered as a 2-3 page comic strip format, providing a 'reward' for reluctant readers for making it that far... what kid *won't* read a comic book, after all!

The books themselves are VERY short... despite being around 70-80 pages each, there are so many pictures and the writing is in larger-print, that in effect each book could be condensed down to an 8-page comic with ease... but then they wouldn't be taken 'seriously' because what teacher or parent is going to use a comic to teach literacy. (More of them, if they grasped how effective they could be!)

With an interactive website attached to the franchise, this is following a new trend in publishing... spreading the branding across multiple media, and encouraging a wider audience because of it.

Overall, not too bad a series... a little too 'quick' for older readers - I know a 9 year old who tore through all four books in a few hours of combined reading time - but for the younger ones, or those struggling to find the power and passion in reading, these could be a very effective way to get them hooked. A little overpriced, perhaps, but then what price can you put on a lifetime of achievement once they are willing and able to read on their own?

Here is a counting book like you've never seen: featuring Donovan Bixley's most popular characters from his uniquely Kiwi `Wheels on the Bus' and `Old MacDonald's Farm'.

Look out for the milkshake-making cow, the All Black lambs, the cute pink ski-bunny, and the colossal squid and many more of Donovan's vibrant, amusing illustrations. Fun for the kids - and fun for the adults!