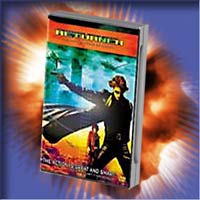 The year is 2002, and Milly arrives in the middle of a gunfight on board a cargo ship transporting people for the slave trade. Milly has arrived less than 48 hours before the first of the Daggra land on earth, and must somehow manage to kill the alien.

Enlisting the somewhat unwilling aid of Miyamoto, a gunman for a local crime boss, Milly must save the earth... or die trying.

With sour echoes of The Terminator (time travel to save the future by altering the past), Independance Day (alien invaders) and The Matrix (some of the bullet-time style effects and outrageously impossible fight scenes), this movie was SO BAD, I had forgotten I had seen it before until about a third of the way through! Now, I have a trick memory for movies, so for me to not even realise I had already seen it means it was total crap in my book.

After less than 20 minutes, I was itching to put another movie on... so I did.

With a plot that is all much the same as a swatch of other big hits, but without their smooth style, this movie is a total wanna-be... and made that much more corny by the very obviously bad voice-over and dubbing, including the main actor (Takeshi Kaneshiro as Miyamoto) saying "Oh wow! You speak English!" when it is clearly NOT English either of them are speaking. But then, it's a Japanese flick so one can not expect it to have been scripted in English in the first place. Still, it adds to the CORN factor.

Overall, if you are looking for a movie so corny it will kill the gathering and prompt everyone to desire wedges and beers at the local pub... this is just the ticket for you.