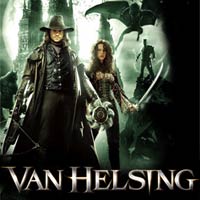 Once there, he meets Anna Valerious (Kate Beckinsale), a woman whose royal family is suffering under an age-old curse that can only be broken when the count is put to death.

This quote, "I think if you're going to kill somebody, kill them! Don't stand around talking about it!", this!!! It has to be my favorite line in the entire movie and it is what I think anytime that baddie does something other than killing the goodie! That line is the best part of a movie that whilst fun, seems to be a bit too much of a mash up of hollywood movies and little of its own unique plot.

This is a world in which monsters exist, Werewolves, Vampires, Frankenstein etc. and Van Helsing is their hunter. He ends up trying to rid a small village of their vampire problem and ends up discovering a much bigger plot unfolding. The adventure is fun and the acting is good but our main two are too much like recent characters (ie. Wolverine and Selene) so it makes it a little harder to find viable and believable for viewing. There are plenty of good one liners going on in this movie but some of the action sequences have suspended disbelief as they are not something you would expect in that time period.

This could have been a really good movie but it stuck to too many similar movies, it is fun when there is nothing else on but I'm not fussed about owning it.

Hugh Jackman, and Kate Beckinsale are right up there in my top actors (well to be completely honest, I only really love Jackman as Wolverine, but a monster hunter is close enough). With monsters, action, attractive actresses, this certainly looked like it would be a great film, but I'm still unsure of it.

This film seems to take a lot from other films, and doesn't really stand out as it's own film. With Beckinsale taking on a similar character to Selene, from the hugely popular 'Underworld' franchise, and Jackman obviously kicking ass with metal weapons similarly to Wolverine in the also hugely popular 'X-Men' franchise, there is little that strikes me as original.

The weapons were fun, and inventive, and screamed out steampunk, but the dialogue and plot lines were incredibly clichĂ ©. The visual environment had a dark gritty medieval feel to it, with a good mix of light and dark.

Overall, this film was unoriginal, with very few inventive and creative elements. But it still managed to provide action, with the bonus of an attractive cast that the viewers will enjoy watching. I will admit I've probably watched this film about 10 times, so there is certainly something appealing enough for me to enjoy it again and again, but I can't put my finger on it.

I think it may have started with Christopher Lee as Dracula, or maybe it was earlier, but there have always been and will always be, actors who unfortunately tend to get themselves stuck in the same type of character. It would seem, as already mentioned, that Hugh Jackman has found himself in this predicament.

From thinly veiled references to his character in X-Men, to an added Bond-esque element, the action is fast-paced and action packed. A distracting part for me was some of the 'Hollywood-isms', for example, the previously mentioned 'car' chase ending in a fiery explosion. Some things are just NOT needed in a movie, especially when the time period that is being used logically and technologically could not support them.

The legends of Dr. Frankenstein, Dracula, Van Helsing and Jeckell & Hyde are tied together in a most ingenious, and sometimes a little confusing, way, with a number of expected and unexpected twists.

Overall, quite an interesting trip... well worth seeing again. Will be waiting for it to come out on DVD.

There's a whole clan of them... the typecast actors. You know the one's... doesn't matter what their character is called, it's always the same character. Well, it looks like, unless he's really careful, Hugh Jackman will join the clan. Though spectacular and powerful, Van Helsing was Wolverine without the funky claws... at the start at least anyway.

With definite spoofs of X-Men (Wolverine references), James Bond (Yes, VanH has a Q section, hidden away), and almost every Hollywood classic (I mean, a car chase that ends in an explosion... Sheesh! You could cover it in caramel or butter and sell it in the candybar!) this movie has it all, comedy, action, special effects... and an interesting new twist on some old legends.

It combines the legends of Dr. Frankenstein, Dracula, Van Helsing and Jeckell & Hyde in a most unusual way, with some interesting new connections.

Corniest bit: A series of one-liners.

Overall, quite a trip... well worth seeing again, but not at full price. Aim for cheap nights, special deals, or wait for it on video and DVD.

Score: 8.5
Product reviews for listing 8589: The Way Back
Directed by Gavin O'Connor