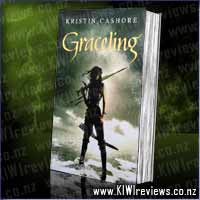 In a world where people born with an exceptional skill, known as a Grace, are feared and exploited, Katsa carries the burden of a skill even she despises: the Grace of killing. She lives under the command of her Uncle Randa, King of the Middluns, and is expected to carry out his dirty work, punishing and torturing anyone who displeases him. Breaking arms and cutting off fingers are her stock-in-trade.

Finding life under his rule increasingly unbearable Katsa forms an underground Council, whose purpose is to combat the destructive behavior of the seven kings - after all, the Middluns is only one of the seven kingdoms, and each of them is ruled its own king with his own personal agenda for power. When the Council hears that the King of Liend's father has been kidnapped Katsa investigates ...and stumbles across a mystery. Who would want to kidnap him, and why? And who was the extraordinary Graced fighter who challenged her fighting skills, for the first time, as she and the Council rushed the old man to saftey? Something dark and deadly is rising in the north and creeping across the continent, and behind it all lurks the shadowy figure of a one eyed king ...

With Graceling, I was hooked from the first page. Another book I picked out for the cover (that's a seriously cool looking chick), but to my surprise, this one actually turned out to be a really good story.

It's a debut novel, so I gave Cashore a bit of leniency in some places, but as you can see by the rating, there were not many of those places. The heroine, Katsa, is quite simply, very cool. She has powers that, while not making her invincible, do make her an extremely formidable opponent. So of course, sparks fly when she finally meets her match, and he turns out to be an arrogant and annoyingly charming prince.

The tension and banter between Katsa and the mysterious prince definitely carries the story as they set out to try and solve the mystery of his grandfather's kidnapping. A very satisfying story with a good ending. Highly recommended.

Mr Elives' Magic Shop seems to appear from nowhere - and disappears again just as fast! Never in the same place twice, it sells only the most exclusive wares... A talking toad, anyone? A dragon's egg? There's plenty to choose from...

Sheltering from bullies in the Magic Shop, Jeremy is persuaded to buy a dragon's egg by the mysterious Mr Elives. Convinced it's a wind-up, he follows the instructions for a ... more...