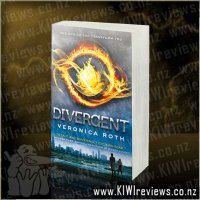 One choice can transform you. Pass initiation. Do not fail!

In sixteen-year-old Beatrice Prior's world, society is divided into five factions - Abnegation (the selfless), Candor (the honest), Dauntless (the brave), Amity (the peaceful), and Erudite (the intelligent) - each dedicated to the cultivation of a particular virtue, in the attempt to form a "perfect society."

At the age of sixteen, teens must choose the faction to which they will devote their lives. On her Choosing Day, Beatrice renames herself Tris, rejects her family's group, and chooses another faction. After surviving a brutal initiation, Tris finds romance with a super-hot boy, but also discovers unrest and growing conflict in their seemingly "perfect society."

To survive and save those they love, they must use their strengths to uncover the truths about their identities, their families, and the order of their society itself.

This book never came up on my radar but I have known about it since there was first news of a film adaptation, the first of which has been on to watch list on Netflix for quite a while yet... Whilst cleaning up the advanced copies bookshelf at work, I stumbled across this and since it was such a slow Sunday, I figured why not (and to be honest, it was the only book left to catch my attention). The book was written well enough that the story flowed, the plot wasn't too convoluted and thus easy to follow, Tris was likable enough, of course I had to take breaks to serve customers, drive home etc. but I was entertained enough to finish it within the day.

I didn't really enjoy the budding romance between Tris and Four, I found myself confused for half of it over his age and most of the time it came off as rather forced to me (also, I am SO over love triangles in media) and so I found that was an aspect that could have been left out, even though I know why authors put them into books. Divergent proved to be a good way to pass away the day, it hooked me into it enough that I wanted to finish it but didn't thrill or interest me enough in the end to want to hunt down the following two books in the series, this is one case where I'm happy to go watch the films instead.

Wow, I haven't been this entranced by a book since The Hunger Games, and in much the same way as that series, I read this in a day. I loved the Tobius and Tris story and I can't wait to see what they do with that in a film adaptation. And I checked out the casting... Am totally ahead of the next teen fad!!

I waited for ages to read this book as I don't (generally) like this genre, but given that I eventually read all novels that go viral (really just to see what the fuss is about see), this was no exception. It's not a terribly deep book but it was a lot better than expected. I got caught up in the relationships and the easy reading styles... If it helps, the sequel (Insurgent) explains some of the pointers, but I suspect I'm addicted more because of the easy reading nature rather than the extreme literature reading nature!!

I see that a huge number of my good-reads friends have read this, yet I have read this and I've probably rated this the highest. That's okay with me. It's not a literary masterpiece but I couldn't put it down and now I want to be all up in the fan fiction. Anything that holds my interest this well deserves five stars. Gone Girl didn't.

Enjoy away :) Also, be ahead of the teenage fad. Love it!

I was expecting a story of some post-apocalyptic wasteland, or perhaps some post-crisis evolve civilisation that had found a successful way to keep the species alive and intact without war... Well, it turns out I was wrong... utterly so on both counts... but oh-so-right when I thought it was going to be a twisted plot that would keep me guessing.

I so appreciate that, and find it especially impressive in a debut such as this. Well done Veronica Roth! The main characters were well developed, enough to give them depth, yet not so much as to be over the top or irrelevant, while the characters who don't play significant roles have only enough detail to get by - optimised and efficient, yet seamlessly invisible to those who are lost in the reading.

Without giving the plot away, there isn't a huge amount I can say, but I do want to comment on how detailed the world was. I loved how real-world landmarks were described in such detail... it was only by pure chance that I happened to watch the movie "Source Code" and see the shiny silver 'bean' described so well in the book... and the descriptions matched so well I could easily recall the passage from the book and 'see' the characters standing underneath it, staring at their own reflections so distorted.

Overall, this is a stunning start, and I look forward to seeing more from this shining new star. The way she took an interesting 'possible social evolution' concept and built a functioning world from it, complete with intrigues, romance, loyalties and betrayals... stunning, simply stunning.

Just wonderful. Like she has nothing better to do. But online entertainment is big business, and when the bodies of real ... more...