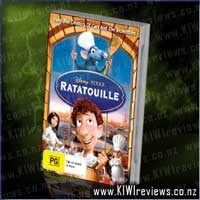 From the creators of Cars and The Incredibles comes a breakthrough comedy with something for everyone.

With delightful new characters, experience Paris from an all-new perspective. In one of Paris' finest restaurants, Remy, a determined young rat, dreams of becoming a renowned French chef. Torn between his family's wishes and his true calling, Remy and his pal Linguini set in motion a hilarious chain of events that turns the City of Lights upside down. Ratatouille is a treat you'll want to enjoy again and again.

We saw Ratatouille when my daughter was little. I was looking for something fun with animals and this movie seemed to tick all the boxes for her. This is essentially a rags to riches kinda story. A rat who wants to become a chef though, was a little hard to swallow. In fact, it was something I just couldn't get behind. Everytime they showed him in the kitchen, cooking and handling all the food I felt a little ill. I personally had nothing against him being a rat, just that he was an animal in a kitchen.

My daughter on the other hand, loved the rat. She loved the way he thought about food. She loved the imagery, especially around the food, flavours, textures and smells. They did that part so well. She got a real kick out of seeing the rat cooking, and thought he was so funny. For her, the important thing was that the main character was following his dreams and not letting anything stop him. In the grand scheme of things, its a pretty good message for any kid's movie to have.

Like all kid's movies, there has got to be a baddie who tries to stop the hero living his dreams. The hero must struggle against the challenges presented by the baddie. Even though I was weirded out by the animal chef, I was cheering for him alongside my daughter. It was a fun little romp, and definitely encouraged my daughter to "cook" more in her little play kitchen. I would definitely watch this again with her, given that she enjoyed the story so much.

For me this is a true family movie, there is something in here for all ages. I love the story line between the two main cooks ad the relationship between the rat. Its full of family comedy as well as animated comedy for the younger audience members.

Along with that it also has adult humour that goes above the children's heads, for this reason alone it has to be one of the best family movies i have seen. I love that it is based behind the scenes of a restaurant, allowing the children to engage and question how their meals come about when we go out to dine.

Im not sure that i would pay the RRP of $39.99 but if you are able to pick this up cheaper, it really is a must watch!

A cooking movie in France with a rat as main character - can't say it sounded interesting to pick up. BUT... this was a huge success in our family!

A great insight for kids about what goes on in a restaurant kitchen. Really entertaining and had our 3 older boys hooked (aged from 3 to 7).

An animated movie and definitely worth watching. The adults had planned to use the time doing other things, but ended up equally enthralled. Kids didn't move the whole movie so definitely kept their attention.

Lots of 'laugh out loud' moments. If you can sell them the concept of the movie (which probably isn't quite so attractive) the actual movie-watching experience is brilliant. And even helped inspire our lads to do more cooking (and even wanted me to cook them ratatouille for dinner!)

OK, I love to cook. No, really, I LOVE to cook... food is more than just fuel for the body, it is an adventure of flavour, a journey of scent, a love affair of texture and taste... which is why I so had to enjoy this movie. Remy the Rat is a rodent with an excellent sense of taste and small, and an imagination to tie them together... add to that a dash of curiosity, a hint of exploration, and a hefty handful of determination NOT to get stuck eating trash... and you have the makings of the worst rat in ratdom, but the hope of the next greatest thing to hit the kitchen.

When Remy finds himself separated from his family, and cooking in the kitchen of his hero, the late Chef Gusteau, while 'driving' the body of Gusteau's son, Linguini, as he lives out his dream of cooking fine food for the elite of Paris, well, it's like heaven for him. Then things start to go wrong when Linguini lets the fame he has accrued go to his head, and Remy's family show up again... then add to this the jealous head chef who had been running Gusteau's since his death... it really becomes a rat's nest of misery for poor Remy.

Hilarious antics abound in this latest family movie offering from the brilliant minds at Pixar. Well worth a look-see if you have enjoyed any of Pixar's past greats. In the spirit of Finding Nemo, this is a tale of finding the greatness in yourself when you face overwhelming odds and beat them, and when you find that with a little bit of passion and dedication even your worst enemies can become your friends... and the bad guy can always be beaten as long as you bring on your best game.

Overall, this is a great new Pixar classic in the making. Well worth a watch for the whole family. the kids will love the simple jokes and comedic capers as well as the silly voices, adult will enjoy the tongue-in-cheek jokes and the deeper levels of the situations... and the whole family will enjoy a fair gold ol' giggle at the newest Pixar Short Film, Lifted. (Watch this again after you have seen the main movie, and see if you notice anyone familiar. -grin-) As a little side note for the die-hard Pixar fans... yes, the Pizza Planet truck makes it's cameo appearance here too, as well as the infamous A-113 reference (Hint: ear tag), and keep an eye out for a cameo appearance by 'Bomb Voyage' from The Incredibles.