ProdID: 6078 - Land of the Lost
Directed by Brad Silberling 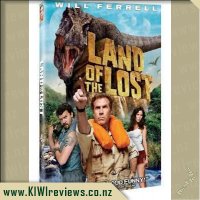 Land of the Lost product reviews

Will Ferrell stars as has-been scientist Dr. Rick Marshall, sucked into and spat back through time. Way back. Now, Marshall has no weapons, few skills and questionable smarts to survive in an alternate universe full of marauding dinosaurs and fantastic creatures from beyond our world - a place of spectacular sights and super-scaled comedy known as the Land of the Lost.

Sucked alongside him for the adventure are smart-as-a-whip research assistant Holly and a redneck survivalist named Will. Chased by T-Rex and stalked by painfully slow reptiles known as Sleestaks, Marshall, Will and Holly must rely on their only ally - a primate named Chaka - to navigate out of the hybrid dimension. Escape from this routine expedition gone awry and theyâ ™re heroes. Get stuck, and theyâ ™ll be permanent refugees in the Land of the Lost.

I never saw the TV series that this movie was based upon but having watched the movie I have to wonder if had I grown up watching it, would I have enjoyed it, I think I would have.

Rick Marshall is a laughing stock of the scientific world and is sinking into depression. After some prodding by Holly, he ends up being sucked into a new dimension along with Holly and a redneck, rude and crude, Will. The three of them must try and survive in this off world and find a way to return home to their own dimension whilst dealing with a vengeful T-Rex.

There are lots of crude jokes going on in this movie, so if you don't like rude and crude, don't watch. Ferrell isn't anything amazing in this role, it's pretty much what I would expect from him and so it doesn't add anything to the overall movie. The acting is nothing amazing and the plot is nothing fabulous but the special effects make up for what is lacking there. There is a lot of cheesy jokes going on in this movie and it fits with the overall vibe of the movie.

This can be funny, but if watched too often it can be a bit irritatin.

Score: 8.0
Product reviews for listing 5743: Any Given Sunday
Directed by Oliver Stone

Life is a contact sport and football is life when three-time academy award-winning filmmaker Oliver Stone and a dynamic acting ensemble explore the fortunes of the Miami Sharks in Any Given Sunday. At the 50-year line of this gridiron cosmos is Al Pacino as Tony D'Amato, the embattled Sharks coach facing a full-on blitz of team strife plus a new, marketing-savvy sharks owner (Cameron Diaz) who's sure Tony is way too old school. An ... more...