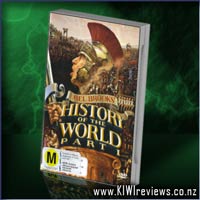 Mel Brooks uproarious version of history proves that nothing is sacred as he takes us on a delirious romp featuring everything from a wild send-up of the film 2001 to the real stories behind the Roman Empire (Brooks portrays a stand-up philosopher at Caesar's Palace), the French Revolution (Brooks reigns as King Louis XV1) and the Spanish Inquisition (a splashy song-and-dance number with monks and swimming nuns).

It's Mel and company at their hilarious best.

Having grown up with Mel Brooks being a major player in the comedy arena, it was great to get a chance to look back on it with older eyes and reassess the humour... I see a lot more of the layers nowdays, and the jokes that had me giggling as a kid because "...they look funny..." now has me sniggering for quite different reasons... and under today's M rating, of course, I wouldn't be showing it to any little eyes nowdays.

Made back in 1981, this was supposed to be part 1 of a 2-parter, as this volume really only covers the early years, and nothing after the French Revolution... but as far as I know part 2 was never made, leaving this as a bit of an open-ended orphan really. Bit of a shame, but threse things happen, and let's face it, it's unlikely part 2 will get made these days, what with the demand for blockbuster hits, rather than movies made for the sheer fun of making something whacky.

However, if you like Brooks' genre of humour, or just want to see what your (grand)parents were on about, then this is a great title to explore, along with some of his other classics such as "The Princess Bride", "Robin Hood: Men in Tights" or my personal favourite, the 1974 classic "Blazing Saddles". If you haven't already experienced his humour, but can appreciate the British Wit, then you'll quite possibly enjoy some of these movies.

overall, this really is a fun movie, but only if you enjoy comedy musicals. With appearances by MANY famous faces including Dom DeLoise, Madeline Kahn, Gregory Hines and even Pamela Stephenson (Kiwi, wife of comedic genius Billy Connelly) plus the narration talents of Mr Orson Welles... this is a great one to pass the cold winter nights with. Put it on, snuggle up warm and enjoy some great laughs.

From Warner Bros. Pictures and director James Wan comes an action-packed adventure that spans the vast, visually breathtaking underwater world of the seven seas, "Aquaman," starring Jason Momoa in the title role. The film reveals the origin story of half-human, half-Atlantean Arthur Curry and takes him on the journey of his lifetime - one that will not only force him to face who he really is, but to discover if he is worthy of who he was born to ... more...