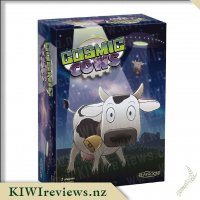 It's time for the Annual Extraterrestrial Cow-Pulling Contest, and aliens from all over the galaxy have come to watch the event! Go head to head with your cross-cosmos rival to see who can abduct three Cosmic Cowsâ"˘ first!

Roll different combinations on the dice to choose which tractor beam to use in order to abduct the cows. With a good mix of strategic offensive and defensive maneuvers, decide which combination of the unknowing bovines to pull toward your spaceship or away from your opponent's! The player that pulls three cows into their Danger Zone wins, in this dicey game of alien tug-of-war!

For 2 Players or Teams, 20 Minute Playing Time, Ages 8 to Adult

Cosmic Cows is a game that I grabbed simply because my youngest saw it and was very keen on it. It didn't look like it would be too simple and could be fun, so I was happy enough to add it to our collection. You open up the board and pop all the cow figures along the middle row, these figurines are nice and sturdy, so I know that they're going to last well. The aim of the game is to 'abduct' three of the cows before your opponent can, by rolling the dice and making wise decisions as to which dice to keep and which to re-roll. Because of the combinations needed to move a cow, this has a yahtzee feel to the game, which I liked as I enjoy dice based games.

You can play this in teams or two solo players, just make sure that if you're in teams that you take turns rolling and discuss your moves with each other. If you manage to get a cow into your win zone, it doesn't mean that it is safe, your opponent can still move your cow backwards, so it isn't a sure thing until you get all three in your win zone. Unfortunately, this does mean that the game can end up going on for quite awhile and I found myself getting quite board with the game and wishing for it to end. In the future, I will adjust the rules to make the game shorter because other than the length of time this was a fun enough game at the start.

Red Dead Redemption is a Western epic, set at the turn of the 20th century when the lawless and chaotic badlands began to give way to the expanding reach of government and the spread of the Industrial Age. A follow up to the 2004 hit Red Dead Revolver, this game tells the story of former outlaw John Marston, taking players on a great adventure across the American frontier.