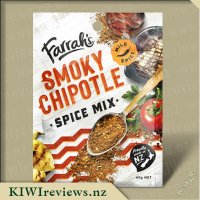 Disclosure StatementFULL DISCLOSURE: A number of units of this product have, at some time, been supplied to KIWIreviews by Farrah's Wraps or their agents for the purposes of unbiased, independent reviews. No fee was accepted by KIWIreviews or the reviewers themselves - these are genuine, unpaid consumer reviews.
Available:
at supermarkets nationwide

Farrah's Smoky Chipotle Spice Mix was inspired by the popular Southern American Cusine, and is a flavour here to stay! A spice mix with delicious smoky notes and hints of mild chipotle flavour. It is such a versatile spice mix that works well on any protein or protein alternative.

We are big Mexican fans in our household, with my husband's go-to meal being some kind of burrito or wraps. A Friday night fake-aways is our treat night so I was genuinely excited to try this product out this week. I opted for the classic chicken strips coated with this seasoning which I accompanied with a dry Asian slaw (cabbage and carrot). I used some Farrah wraps and used the leftover seasoning to mix in with some Best Foods mayo.

This was super easy to prepare and the whole meal took less than 5 minutes to prep and cook. Normally we would use a Chipotle paste which can sometimes be a bit overpowering if you use too much but this was a good mix of flavour and spice. I thought that the smokey flavour came through which was nice too and was a tasty match with the seasoned mayo.

Another thumbs up from husband and would definitely make a re-appearance in the regular Champion weekly menu. It says it is a mild spice but it packs a good punch of flavour so I wouldn't be put off with it not being any hotter. Which would be great for a family-friendly meal.

When I first left home and went flatting, I won't lie, I survived on easy to prepare meals such as frozen meals, and macaroni cheese from a box. However since having children my kitchen skills have improved dramatically. My parents used to create meals with lots of flavour, and I decided that's how I want to cook too, I have a preference for cooking spicy meals, but with the children it has to be mild for them to enjoy. Upon seeing that Farrah's had produced a Smoky Chipotle Spice Mix, the numerous possibilities of how to use the product came flooding into my mind.

When I saw I was lucky enough to receive the product to review, I decided that I would make some chicken tortilla wraps for dinner. The packaging is vibrant, certainly eye-catching, and would stand out on a shelf in the supermarket. This spice mix is a mild spice according to the label, perfect for the children. This is gluten-free, vegan friendly, and has no artificial colours or flavours. Farrah's has included a recipe on the reverse of the packet for their version of tacos.

Upon opening the packet there was a deliciously spicy aroma wafting up to my nostrils, the colour was rich, and the spice mix is fine in texture. I prepared the chicken and rubbed a generous amount of the Smoky Chipotle Spice Mix over each piece. As the chicken cooked, the spice mix darkened in colour and the aroma was intensified. Once the chicken was cooked right through I compiled the wraps, we had lettuce, chicken, tomato, grated carrot, cucumber, grated cheese and some aioli. The chicken was absolutely delicious, just the perfect amount of heat for the children, there was a definite paprika hit and I found that I was left craving more.

I personally loved this product, such an easy way to add flavour without the added hassle of trying to make your own mix, and trying to balance the spices. This product is versatile and can be used with all types of meat, next time we are going to use it on a nice, juicy steak. This product is produced by Farrah's, a New Zealand company, that create high quality products for an affordable price. 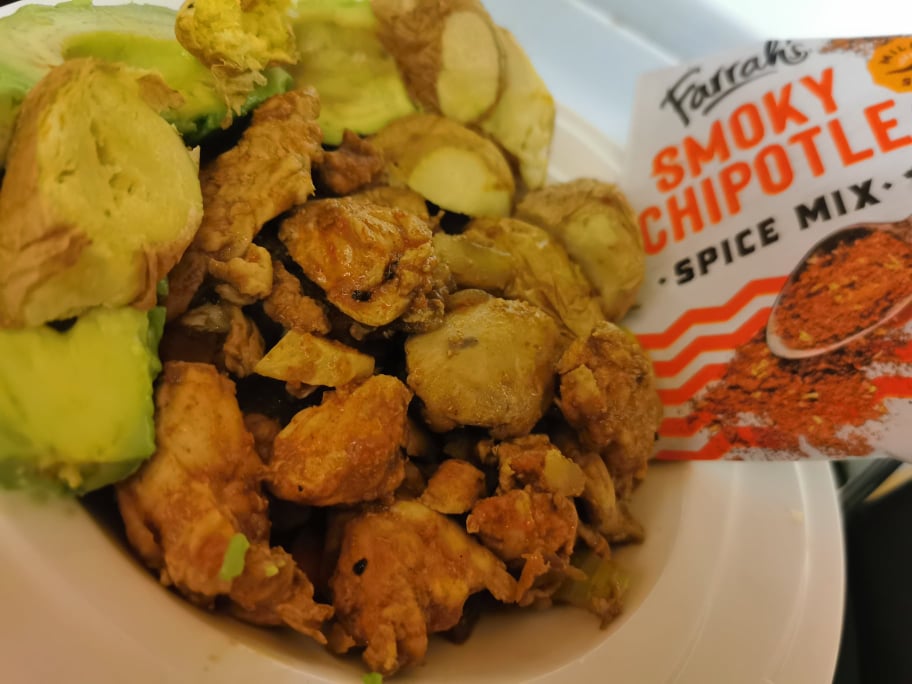 We had a large (800g) packet of chicken strips which had been lurking in the freezer for some weeks, so I thought it was time we used it up. We had planned a potluck dinner with two other families, so I decided to prepare the chicken in advance and take it with me. There were a few potatoes that would go nicely with it and would be filling on what promised to be a frosty night.

I kept the additional items to a minimum as I knew others would be bringing salads, so I stir fried the chicken in a wok with one onion, a stick of celery, garlic, and a small carrot. Plus the entire contents of the spice packet and just enough water to stop it getting too dry. My aim was to ensure the spicy effect came out and was not overwhelmed by stronger vegetables. Chicken is very mild, so it is always good combined with another, more dominant flavour. The instructions on the packet suggested 500g of chicken, but there would be children at the dinner, so I was aiming for an end product that was not too hot for them.

Once the chicken was cooked, I put it in a lidded pot for the journey and also packed the uncooked potatoes ready for preparing when we got there. I did taste a little of the chicken before packing it, and was pleased with the result. The heat from the chipotle was minimal but the flavour was intense; I could spot an aftertaste of what I thought might be lemon, but on checking the listed ingredients I could not find it there. However, Worcestershire sauce and citric acid were both included so it is likely they accounted for the "lemon" undertones. Both the coriander and cumin were easily discernible, giving a curry-like tang to the effect, and I could also make out a hint of tomato.

I did not tell the children what was in the mix; I served it up on individual plates with some quartered baked potatoes on the side, and invited everyone to try it. Only one person said he was not keen; he is a very fussy four-year-old who likes his food as plain as possible, so I was not surprised by his reaction. However, the adults and the other children (ranging in age from Fussy Mr Four to Miss 15) all liked it as did the adults. There were eleven people there but three are vegetarian or vegan, so the meat was divided among the remaining eight. One of the dads present ate Mr Four's rejected meal as well as his own because he enjoyed it so much.

So pretty much a thumbs up all round for flavour, mild and kid friendly heat quality, and price. I will try it again at some stage but next time I will follow the recipe on the pack and serve it in tortillas. I like the idea of having it with corn and lettuce; it would make a nice summer dinner. However, my version was just perfect for a winter night's meal.

Calzone is an Italian word. Traditionally Calzone is a pizza that is cooked folded in half - much like a Cornish pasty is a folded pie.

Our Calzone is handmade, like all of our products, in our stone oven with the best ingredients available. Healthier than a pie, tastier than a bag of chips - less fat than both!

Put it in your lunchbox they're just as good cold and you can even microwave them... if you must.