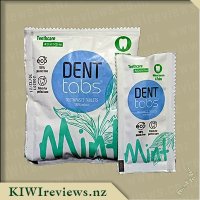 Price:
from $2
Sample/s Supplied by:

Disclosure StatementFULL DISCLOSURE: A number of units of this product have, at some time, been supplied to KIWIreviews by DENTtabs or their agents for the purposes of unbiased, independent reviews. No fee was accepted by KIWIreviews or the reviewers themselves - these are genuine, unpaid consumer reviews.
Available:
via online store and select venues
Samples for Review:

DENTtabs are the fresh new way to clean and polish, leaving your whole mouth clean and smooth. Great for travel and at home, DENTtabs deliver exactly what you need in each brushing.

No mess to clean up after kids. No waste. Non-abrasive, no binding or preservative agents. No aluminium or plastics, just clean teeth. Available with and without fluoride.

The packaging is certified home compostable and sealed for freshness.

I was intrigued when I first saw dent tabs, so just had to try them. I have only ever experienced tooth cleaners in a paste format so the thought of having it as a tablet was quite novel. I was really keen to see how these worked!

When I opened the package I could smell a mild mint smell straight away which was quite nice and they reminded me a little bit of chewing gum. I decided to try one straight away so popped one into my mouth. It wasn't quite what I was expecting at first it felt kind of chalky on my teeth as I chewed. The mint was definitely milder than I had anticipated too. Once I had chewed more it further broke down to more of a foam and I was ready to start brushing.

I found I preferred to chew two tablets rather than one for the ideal amount to brush with. Though to be fair I would probably use more toothpaste than the recommend amount anyway. I did like the clean I achieved with the dent tabs it was just as effective as my regular option and left my mouth feeling fresh. I would prefer to have a slightly stronger mint taste but that's just personal preference.

I think dent tabs are great value for money and I would definitely buy them again. I think these are perfect for when you are going on holiday too - so much easier and more convenient than taking a tube of toothpaste, takes up less space in the bathroom bag and doesn't leave it messy either.

I have seen similar products advertised over the last couple of years but hadn't gotten around to trying any due to the large stockpile of toothpaste we had. I thought that these would be well worth the try, especially for my youngest child who has very, VERY, wonky teeth that, for their top teeth, are going in some rather funky directions. One of the downsides to this, is that getting in those gaps between the teeth is even more difficult than the average person, so toothpaste that you have to chew... I thought that this might be great for helping out with the near impossible gaps gets a little bit of a clean.

Opening it up, all three of my kids enjoyed the smell and were eager to give these a try for me. The bump in the road came when they all declared that they didn't like the taste of it. Trying it myself, I didn't mind the taste, and we ended up reaching the conclusion that it wasn't the taste that they didn't like, it was the chalky texture that the tab created in their mouths. I will admit that it was a struggle the first few times, to chew the tab and then not swallow at all, but we all got there in the end. I have to agree with my children, in that the end texture isn't enjoyable at all.

My youngest was the one I was most concerned about, when it came to the texture as they also have some sensory issues. They have pulled a face each time since, when I have asked them to use it to brush their teeth with, and made noises of complaint, however they have still been using it. They did remark after their first use "wow! That does feel really clean", so hopefully that after-feeling and trying to help keep her teeth healthy, will enable me to convince her to keep using these. For me, I did find that I had to rinse my mouth out more than I would with traditional toothpaste, but I find it an easy trade-off.

I wish that this had come in some kind of jar or something, for ease of storage (you wouldn't want these to get wet by accident) but other than that, any con we have, such as the texture are nullified by the ease of use, environmentally friendly aspect and helps my youngest. I will be buying these again, once I find a handy storage container.

Having already tried the With Fluoride version of this product, I was interested to see how the Without Fluoride version would compare. As I had done with the first version, I decanted the tablets into a box for ease of storage and ready access. My thoughts were that the fluoride version would be good for younger people while this one might be more for adults and therefore a little stronger.

I was surprised to find that this one was actually slightly milder. I thought I might be imagining it, so without saying anything, I asked Miss Eight for her opinion. She had previously tried the version with fluoride, so was in a position to comment. Without any prompting, she too said that the fluoride free version was not quite as strong. Of course, this may have been just due to what we had eaten immediately before brushing, but it was an interesting observation.

Mr Ten and his father did not like the product at all. Part of it may have been not wanting to step outside their comfort zone and try something new, but they said they did not like the taste either. Miss Eight, on the other hand, was most enthusiastic and said she would happily use it every day. She liked the flavour, and enjoyed the challenge of cleaning her teeth in a new way. Her mother, too, said she would certainly use it. She is someone who proactively buys household items that are environmentally friendly so the idea of minimal packaging and a smaller product appealed to her anyway.

My aunt, who is many years older than I am and has no teeth of her own left, was the next to try it - quite by chance! We were visiting her and she said she had forgotten to replace her mouth wash. As she was suffering from a particularly nasty ulcer underneath her lower denture, she had been rinsing her mouth out regularly to try to get rid of it. My cousin wanted to try out the tablets, so while he was brushing I asked her if she would like to try one too as it just might help in the interim. Both she and my cousin thought that there would be nothing lost so we crushed it for her. She removed her dentures, then swilled in round in her mouth a few times before rinsing.

And it helped! Her mouth felt a lot fresher, and the pain of the ulcer had lessened somewhat. We looked at the ingredients on the packet and there were several included (like sodium bicarbonate and menthol) which are present in some mouth ulcer pastes, while the foaming agent added to conventional toothpastes (and is one of the causes of ulcers in some people) was absent. So there was a scientific basis for the relief she felt; it was not just wishful thinking. I gave her half a dozen of the tablets so she could keep using them until she could replace her mouth wash. It is possible she might switch to the tablets completely if they continue to help.

Unscented - Made with a black beer. Monty is a bit of a balancing act between the dark and the light. That makes him pretty even-keeled and hard to upset. You won't catch him making a stink about anything.

***DISCLAIMER: While each individual soap will use the same recipe ... more...