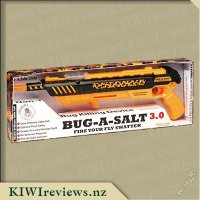 An upgraded model from the Bug-a-Salt v2, the BUG-A-SALT 3.0 is specifically tailored to the needs of the more serious fly hunter. Those who are fluent in weaponry & gun handling will appreciate custom improvements such as the cross-bolt safety, trigger redesign, and Patridge sight (not to be confused with the bird, sight is named after the famous rifleman Patridge).

We are very proud of this new, lethal edition to our family. However, we must warn that instead of leaving flies whole for easy cleanup, it may splatter them. Lorenzo also assures the 3.0 model greatly increases odds for in-flight take down.

UPDATED FEATURES:
•  New Cross Bolt Safety! Once it's on, it's on. Once it's off, it's off. Feel free to rapid fire, folks!
•  Sleek design has streamlined the feel of the gun. It's like butter on toast.
•  Snazzy orange + black fly graphics ensure all of your friends will say "Awe, I want that one!"
•  Updated engineering on trigger mechanism. It's now VERY light - so be careful! Keep away from children, pets, & idiots.
•  Barrel has been lifted & patridge sight added for extremely accurate shooting. You can shoot the fly in the back of the neck now!
•  Improved, more durable salt hopper makes tactical reloads easy during the heat of battle.
•  Stronger spring creates a tighter salt pattern.

When I discovered that a new, upgraded model of the Bug-a-Salt gun had been released, I simply had to try it out. I wasn't expecting much, but the results were far better than I could have anticipated! With the stronger spring giving the salt-blast a lot more 'oomph' and a redesigned muzzle keeping the pattern tighter, it' takes a bit more skill (and luck) to hit the flies in-the-air but when you do hit them, you REALLY hit them.

Upgrading to a Patridge sight and lifting the barrel higher up the body has made it far easier to get a solid aim on the little buzzers when they are standing still - I found that with the v2 model I would sometimes inadvertently 'shoot low' but that doesn't happen now that the barrel is more in line with the sights. I also have to say I like the new safety mechanism, where you simply press a button to set it on or off and it stays that way. It makes rapid-refire situations less annoying and enables fast take-downs when I have to grab-&-shoot on short notice. Flies don't exactly send you a txt saying "I'll be buzzing by in 5 minutes if you want to be ready for unwelcome visitors."

While the blurb says the trigger is a lot more sensitive, and it is, it's not so sensitive as to be dangerous. It's still easy to 'find the edge' so you know when it's about to fire and brace yourself for the punch. Amongst the many redesigned elements, it took me a bit to realise that this version is also a bit shorter in length and height than the v2, which makes it easier to hold steady when you are shooting one-handed, helped by it also being about 40g lighter overall. The v3 fully-loaded is still lighter than the v2 empty!

Speaking of reloading, the new, wider salt hopper is a lot easier to refill in a hurry, but it's also shallower so you need to be aware that dumping in bulk salt is going to result in some spillage. I found storing my 'blasting salt' in an old sauce bottle was handy - I could open the lid with a twist, pour in the salt in a controlled manner, and seal the bottle again quickly and securely.

Overall, this has to be the most fun way I can possibly think of to deal with the Summer Fly Problem. Trotting this out at your next BBQ is sure to be the best conversation-starter or ice-breaker you could want, and will provide plenty of entertainment as well as a very effective, eco-friendly way to take down those unwelcome little flying guests.

CHUX 3 n 1 bathroom sponge has a highly absorbent sponge, a non scratch scourer for cleaning mould and soap scum and a chamois side to wipe surfaces dry and leave them streak free. True 3 'n 1 functionality