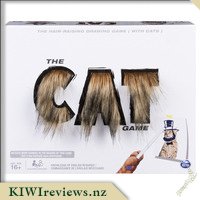 The meow-ment is here: The hilarious game of drawing everything with cats. Choose from 3 categories and 18 cats to draw what's on your card and have others guess your drawing. Wheoever Guess the most, WINS!

Introducing The Cat Game â" a hiss-terical drawing game for cat people (and regular people) Play solo or divide into two teams and catfight your way to victory. For individual play, select a card from CATegories like fLICKS (movies), PURRsons & PURRfessions (famous people, characters or job titles) or CAT-tivities (actions). Use the erasable drawing board to sketch out each clue â" with one cat-veat: you must use a cut-out of a furry feline in each drawing! The first player to guess five clues wins!

For large groups, the stakes are raised! Two teams simultaneously battle it out, sketching cat-centric clues in a race to collect 20 points. Only now, players can claw back extra points by guessing the opposing teams clues as well! The fur may fly but fun will definitely be had once you get your paws on The Cat Game!

Pictionary isn't a new game, it has been around for years but people keep coming up with new ways to make the game a little more interesting and so here we have The Cat Game. Now, this is aimed at those sixteen and older, but I bought this over a year ago at the insistence of my then eleven year old as it wasn't too expensive and I couldn't see why this would be suggested as sixteen and up. The game has several cat pictures, of which you must use at least one every time that you do a drawing. This is where I don't like the box, as the inserts aren't quite big enough for the cats to sit in comfortably, so they often end up all over the place.

The game is simple and easy to follow, grab a card, pick one of the three options and announce which option you have selected to the table and then select as many cats as you wish, minimum of one, and draw. What I feel the game could have done with was a timer as there are rounds where it drags on as no one can guess or the drawer is stuck on what to add. There is also no suggested quantity of cards to collect to win, so we come up with our own depending on how long we want to be playing this. When it comes to the suggested age, I found this didn't really apply. Yes, there were plenty of things my three kids didn't know of but they have enough basic knowledge that they were always able to find something to draw.

This game, while not one I would pick off the shelf, has kept the kids entertained when playing it over the last year or so, so it has ended up being well worth the price tag.

Long ago, in the land of Flanaess an evil demoness founded a cult dedicated to exploring evil in its most elemental forms. This cult was based in a temple just outside the village of Hommlet in a vile shire known as Nulb. Soon, this cult ruled the region with tyranny; times of chaos and violence ensued. Hard-fought battles were ... more...