Home > Categories > Books > Romance > The Paris Of The East review

ProdID: 8585 - The Paris Of The East
Written by Karen McMillan 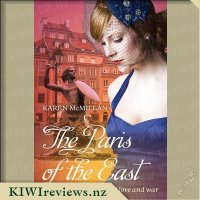 Disclosure StatementFULL DISCLOSURE: A number of units of this product have, at some time, been supplied to KIWIreviews by McKenzie Publishing or their agents for the purposes of unbiased, independent reviews. No fee was accepted by KIWIreviews or the reviewers themselves - these are genuine, unpaid consumer reviews.
Available:
August 2019

The Paris Of The East product reviews

Warsaw, 1939. Four friends picnic on a brilliant summer's day and celebrate an engagement, aware of the rumbles of war, but hopeful that in any conflict Poland will have the upper hand. But only months later, Poland has surrendered and dare-devil pilot Rafael is ordered to flee the country, eventually flying for the RAF in Britain. The other three remain in Nazi-occupied Warsaw - Rafael's spirited wife, Celina; his shy and brooding brother Marek - who wishes he was the one Celina had married; and their plucky friend Anna. Danger lurks on every corner of occupied Warsaw, even more so when the three friends become active members of the Polish Resistance...

A page-turning story that spans the period of the Second World War, this is a dramatic historical adventure that goes from Warsaw to Lublin, from Bucharest to Paris, from London to the concentration camp at Ravensbruck - but always at the heart of this novel is the mesmerising city of Warsaw - 'The Paris of the East'.

A treasure trove of cross-stich designs!

From ballet shoes and butterflies to folk hearts and roses, The Big Book Of Cross-Stitch Designs has motifs galore, plus a wealth of project ideas for cross-stitchers of all experience levels. Packed with more than 900 designs and simple step-by-step instructions for stitching and embellishing, this inspirational guide has everything you need to add stunning accents to linens, home furnishings, clothing, and more.