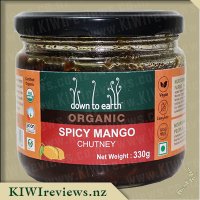 Disclosure StatementFULL DISCLOSURE: A number of units of this product have, at some time, been supplied to KIWIreviews by Down to Earth or their agents for the purposes of unbiased, independent reviews. No fee was accepted by KIWIreviews or the reviewers themselves - these are genuine, unpaid consumer reviews.
Available:
via online store and selected retail outlets

Our organic Spicy mango chutney is sweet and pleasantly hot and is an extremely versatile hot accompaniment to crackers, spreads or any meal. It is heavenly infused with spices and acquires a fresh aromatic taste.

This tasty mango chutney gets its taste from mango mixed with vinegar and chilli powder. It goes pretty much with any meal of the day. The fine texture of this mango chutney makes it even more appealing.

The hot weather lately has called for many summer platter style dinners so chutneys and sauces have been a staple in my grocery shopping. This Down to Earth Spicy Mango Chutney is fabulous with the perfect amount of kick against the sweetness of the mango that I have been able to use it with a number of dishes. Alone with some cheese on a cracker, in a sandwich, and as an addition to sauces in meals it has worked amazingly.

When you have it on a cracker with cheese you certainly can pick up on more of the spices and heat but it is not overbearing and I found it to be a good amount of heat. My children found it slightly too spicy for them though when I made steak sandwiches with salad and mayonaisse the heat was washed out by the other flavours leaving you with the mango taste coming through but none of the mouth burn.I loved the texture you can see lumps of the real ingredients including what I thought to be almost caramelised onions which were really tasty.

I used the chutney in with some coconut cream and a little bit of curry powder and brown sugar to make a sweet mango curry which is a huge hit with my children. Given this chutney already has a great level of savoury flavours and spice it worked really well as a base for making a curry sauce and my childrne much prefer the sweet curry sauces. They call it fruity chicken curry and decided this was the best one I had ever made and I should use this chutney for it again in the future. 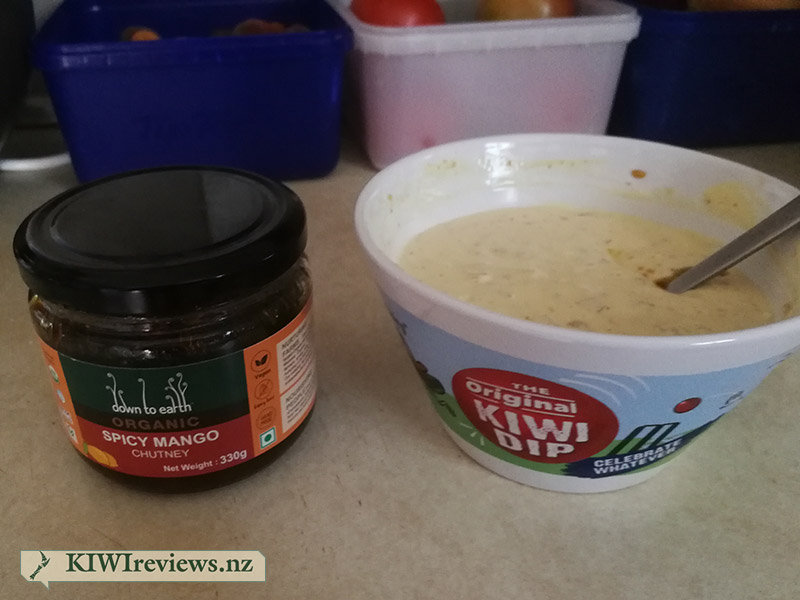 Finding myself in need of making a dip, with no reduced cream handy, nor any onion soup packets in the pantry... I was stumped. However I did have a pottle of sour cream I had originally bought with the idea of making nachos, and I spotted a jar of the Spicy Mango Chutney set aside to review with some sausage in a few days... inspiration struck!

I emptied the sour cream into a bowl, added 3 tablespoons of the chutney and a grind of fresh salt, mixed it well, and tested it. Not too bad... but it needed more punch so I dolloped in two more tablespoons and a dash of dark soy sauce. Perfect! I popped it on the table and sat back to see who would try it first. It was eyed up curiously for a little bit, then one of the guests gave it a try. That was it, the stampede was on, and in no time at all the bowl was scraped almost clean, and I was getting requests for another batch. Couldn't comply however, but it prompted talks of another get-together where, it is assumed, I will provide another, larger dose of this fine dip.

I also tried some relish on a wrap a few days later, with cheese, salad, some garlic-fried asparagus and topped by sliced avocado and fresh-ground black peppercorns. The sweetness came through well, smoothing off some of the bitter notes from the rocket in the salad, and there was a definite warmth at the end from the chutney. However, I like spicy food, not to extremes but my idea of 'mildly-spicy' makes most kiwis' eyes water. So, I found this to be a sweet chutney more than a spicy one. That said, I did quite like it, and would gladly eat it again. I think it would be a great base to make a ribs sauce from, as it would stick to the meat really well, and as it cooks it would caramelise ontoa really thick, flavour-packed glaze. Definitely worth trying!

If you love your chutney then add this Down to Earth Organic Chutney Spicy Mango to your shopping list as it is fabulous and you get a good hit from it. I love the spices and the smell when you open the jar. When I got the jar open and took a smell I knew straight away it was going to be amazing. I got a tea spoon out and tried some and so did my partner and we both said YUM. I was looking on the jar for ideas on what to pair it with and found a small section that said goes well with Indian food as well with continental cuisine. I was hoping for more of suggestions of food flavours to pair it with but that is all good.

We were having a bbq with lots of friends and kids for my oldest sons 11th birthday and we decided to do home made burgers as quick and easy. I placed this Down to Earth Organic Chutney Spicy Mango on the table with other selections of sauces and mayo so people could choose there own flavours for there burgers. This flavour was a hit and many reached for this chutney to go in there beef burger. The comments were all positive afterwards and they really enjoyed it.

Over all is it a lovely chutney and I love that it is organic. It is a great size jar for the price and would want to be a chutney that you had on hand in the fridge. It also had a super long shelf life best before 2021 which I see as a long shelf life. can't wait to try it with some crackers and cheese. 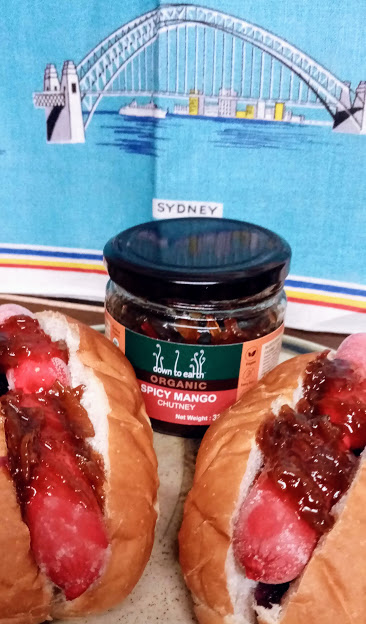 Our aunt and uncle had their three bottomless grandchildren staying with them when we called, so the food they had organised for lunch was plain and filling, and there was plenty of it! American hot dogs are a versatile way to satisfy hungry teenagers but are also appealing to older people who have just driven through two mountain passes on a very cold day. I took one look at the spread and went back to the car to bring in the review product that I was sure would go admirably with the hot dogs: our jar of spicy mango chutney!

The hot dog sausages were sitting on a bed of red cabbage and onion sauerkraut; a dollop of chutney on each one made our mouths water long before we had so much as tasted the combination. But within minutes the youngsters had demolished their first and were already attacking their second! I usually serve mustard with food of this type, but I have used pickle or chutney a couple of times instead and have enjoyed the change. This chutney is one of the best: it has a unique flavour which complements the sauerkraut perfectly, jazzing it up and adding a welcome richness to the sausages. It was not long before I was on my second as well!

It was interesting to see how much the spiced mango differs from the plain sweet variety. Although the mango still provides the dominant flavour, there is a distinctive sweet-and-sour aftertaste which adds depth to the fruit. The spicy effect comes from the combination of red chilli, chat masala, garam masala, and cumin - a flavour blend which imparts not so much heat as a pleasant warmth. When eaten in combination with the hot dog, the heat was barely there, but when I tasted it on its own there was a recognisable kick. For me, that would mean that it would accommodate itself nicely to a range of foods.

Later that day we had oat biscuits with a smear of curd cheese, and added a blob of chutney on top. The effect this time was quite different. The chilli was more evident; the cheese did not mask it nearly as well as the sausage had done, and the youngest of the boys immediately said he did not like it - it was too hot! Everyone else approved, however. As a final check, we stirred some through more of the curds and tried it as a dip with potato chips and this time he said it was great. I think he might have encountered a rogue blob of chilli the first time round.

When we departed, there was still just under half a jar left despite seven people having finished what appeared to be a reasonable amount. We left it with them so they could continue to try it out in more dishes. They have promised to let us know if they find any innovative ways of using it!

Swiss Deli Delicatessen Liver Pate is prepared from liver of top quality New Zealand veal and pork. Seasoned with pepper, onion, ginger and parsley, this traditional ready-to-eat product is an ideal appetizer for any special occasion. It is best served spread on top of rye bread, as a sandwich filler or as a dip with ... more...