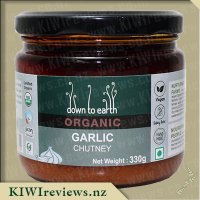 Garlic chutney or lehsun ki chutney are all various regional names of garlic chutney in India. Made of best quality garlic and dry red chilli powder.

Goes well with buttermilk, curd or even paranthas. Can be eaten with roti directly. Contains no sugar and preserves the taste of garlic in original form.

I don't know what I first expected here but I should have read a bit closer at the name and description. I was not expecting so much chilli oil on top and the chutney was closer to sauce in some ways as not as chunky as some. So after getting into the jar (which took a keen visitor who was much stronger than me) I was surprised by the liquid bit on top. I mixed it all through a bit before using which worked for me (I don't know if this was just because I didn't use it for a couple of weeks after receiving).

The taste was strong clear and distinct. This meant I added it to a range of dishes like wraps, snacks/crackers/dips, pasta, sandwiches (hot and cold) and got some great results. For me, this was too good to share with guests as they may have been surprised and it was quite strong and not really something I would spring on a visitor on a platter. I did put it in a lovely tomato pasta vege medley and that made me keen to try it in a salad dressing which was great (not too much though!)

I loved the taste and have experimented widely with it and the size of the jar means it lasts a long time for us in our house as not everything is improved by garlic/chilli chutney and pizza was a bit of a hit/miss affair in this case. Worked well in vegetarian dishes but no surprises there.

I found it very versatile and down to earth have done well to give a good range of strong and useful chutneys for me. Also I liked the reusable jar which I am sizing up for taking breakfast to work in.

I am a garlic lover, big, big garlic lover, I use it in practically every dinner meal that I make. I find too many items that I buy from the shop and claim to be garlic flavoured, you just can't pick out the taste easily (I have a friend just as into garlic as me and they strongly agree with my sentiments when products claim to be garlic flavoured). I didn't allow myself to get pessimistic about this, simply hoped for something that would have a good garlic taste for me to sink my teeth into. Opening this up proved to be a bit of a trial, my go to of gently banging the edge of the lid to make the seal pop, too a few more tries than usual.

Opening it up, I noticed a lot of chilli oil on the top, even though I knew I would be altering the taste a little, I drained what oil I could before stirring the remaining contents, to ensure no other separation. It looks like it has a tonne of garlic, so I eagerly fished a little out with a teaspoon to give it a try. The garlic was definitely there, I just found it overpowered a bit by the heat of the chilli and such. A favourite, snack dish of mine is diced cucumber mixed through cottage cheese. I decided to add some of this to it, to see if the cottage cheese could off set the heat a bit and I could still get a nice flavour. Whilst I still found it hot, this was a vast improvement and I polished off my snack.

Mixed with the right foods, this adds an extra boost of garlic and flavour, I've used it in a few stir fries now, and whilst it isn't a hit with the kids, and I don't think I will buy this, it certainly won't go to waste.

Oh my gosh I have died and gone to heaven. Normally, when I get anything garlic flavoured I find it lackless and tasteless - my husband says I have over dosed on garlic and can no longer taste it. But, with this oh boy do you taste it! It is so good!

Coming home from our picnic two weeks ago we had an easy going dinner just having left overs the only difference was I opened this instead. However, opening was rather difficult as the lid was stuck firm - had to get my superman to open. After straining some it finally popped and he stuck his finger in and started coughing and said 'wow thats strong you are going to love it'. Covering my wrap in the garlic I stuck chicken, salads, cheese and hummus on it. Wrapping it up I took a bite and my eyes just about fell out of my head. Actual garlic was on my wrap - devine. Now I had gone over board covering it and you could tell, but man it was good.

A couple nights later we had left over meatloaf and I put a dullop of this on top of the meatloaf. Everyone commented about how strong it was and how good it was. It added another dimension and tasted great mixed in with the mashed potato. I just loved the flavours coming thru. We then had fish and chips, where as the rest of the family ate with tomato sauce and tartare sauce I just used this. It didn't mix as well being more chunky and some what solid but the garlic was all I was going for - and then - for something different had steak wraps and this took my award winning five second dinner onto another level.

This is one item I will be having in the fridge again. We are always having wraps and garlic mixes well with pretty much any ingredients. Its a great extra for things that are a little dry and adds some moisture to the dish. We will be making pizzas next week for dinner and my daughter has already air marked this as her cover. Can not rave enough about it. 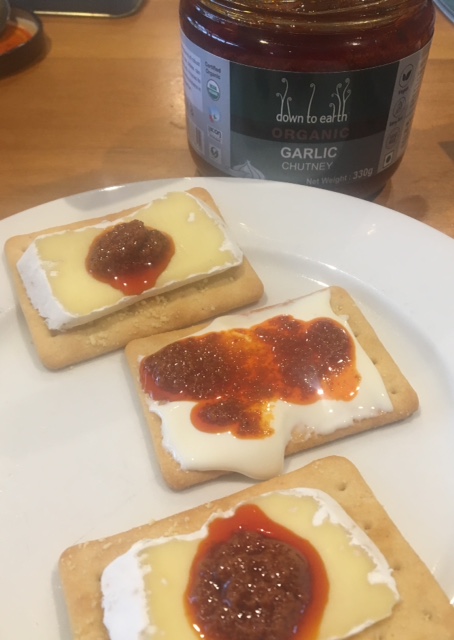 Miss Seven took one small taste of this chutney, pretended to pant for breath because she had not expected it to be quite so strong, then declared "Ooh, that's HOT! Dad will like this - he loves hot stuff!" I too had the same reaction - at first it did not seem to be hot at all, but then the chilli hit me and my voice temporarily went up an octave! However, we found when we stirred the contents that the heat was not quite so intense. The chilli appeared to have all risen to the top in transit. Something to remember for next time - stir it first! We also had some trouble getting the lid off: the jar was very well sealed, and when we did get it loosened there was some seepage of oil, so it would pay to take great care when first opening it.

Miss Seven's father was still at work, so my daughter and I decided to save him some and try it out with the children in the meantime. Miss Seven was willing to try more as long as it was diluted, so we made sure to add a very small amount when it was her turn. (Mr Nine, meanwhile, refused to try it at all because it might be too strong!) We first tested it with a variety of cheeses. My daughter had camembert, cream cheese and blue available so we tried all three with biscuits and chutney. The camembert and cream cheese were delicious with it, and even Miss Seven thought it was not too spicy in this combination. The blue cheese was not nearly as successful. The two flavours clashed and none of us felt it was a successful mix.

For dinner that night we were having macaroni cheese with mussels. We stirred a small amount of chutney into the dish (after first taking some out for Mr Nine!) and quite liked it served in that way. I would have preferred a bit more chutney in mine as it was not quite spicy enough, but as my daughter rightly pointed out, it was easy to add more but if you put too much in at the start it could spoil it for some. I think she was right as Miss Seven happily ate it while I added another teaspoon to my own plate and stirred it in.

My daughter thought she would add some to meat sandwiches, and make a reduced cream garlic dip with the chutney added in place of the usual onion soup. I think that would be effective although we have yet to try it that way. As we were discussing it, my son-in-law arrived home ready for his dinner - we had kept some for him, complete with the added chutney. He sat down to eat it, had one mouthful, then asked what the flavour was. We told him and he assured us it was great, but he would like a bit more - and then he proceeded to add another heaped tablespoon to his dinner. Miss Seven was delighted!

•  65% whole fruit
•  Gluten free
•  Preservative free
•  Made in New Zealand
•  Refrigerate after opening and use within 14 days.