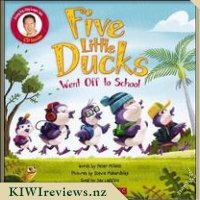 Children can sing along with Jay Laga'aia as they follow the text, or do their own karaoke version with the backing track.

Being an early childhood teacher I am always interested in finding new books for the tamariki at my centre to enjoy. And they are now able to identify a KIWIreviews parcel when it arrives and sit there waiting for me to open it to see if there are any new products for them to try - especially books! Thankfully for them this time we found this book, Five Little Ducks Went Off To School, hiding in the bottom of my box. I was quite keen to hear this one because we have enjoyed other books by Jay Laga'aia, and to be honest it is nice to give my own voice a break sometimes!

The nice bright cover certainly took the interest of many of our kids. We had a discussion about each of the ducks - what they were wearing, identifying the colours of what they were wearing, and then one child noticed the turtle. We had a discussion about what he could be thinking. Just the cover encouraged so much discussion I could tell it would take a little bit to get through this book! We decided together that for our first look through we would listen to the CD without stopping to be able to hear the story, then we would be able to go back and look at the bits we wanted to have a closer look at.

Hearing the CD begin I picked up very quickly on the very familiar tune. It did seem to be a new tune for many of our children but this didn't matter, many of them were tapping and bopping along as the song went on. As we made our way through the book we learnt more about the trip to school for the five ducks that soon became four, three, two and then just one as each of them realised they had forgotten something they needed to take to school with them. Suddenly there were no ducks left - would they all make it back to school on time?! Of course they would! After making it to the end of the book we went back to the start to have a closer look. Remembering the turtle that was on the front we decided to see if he was anywhere else in the book. We soon discovered that he was on every single page and it became a game of i-spy, trying to find the turtle on each page and discussing what he was up to. There is so much in this book to keep young children entertained, and we only put it away on this first occasion because our morning tea was ready and it was time to eat.

This book is one that is going to be enjoyed over and over again at our centre. I look forward to seeing what else we can discover over the next few times of reading, and I know it won't be long until our tamariki are singing along with the catchy tune. 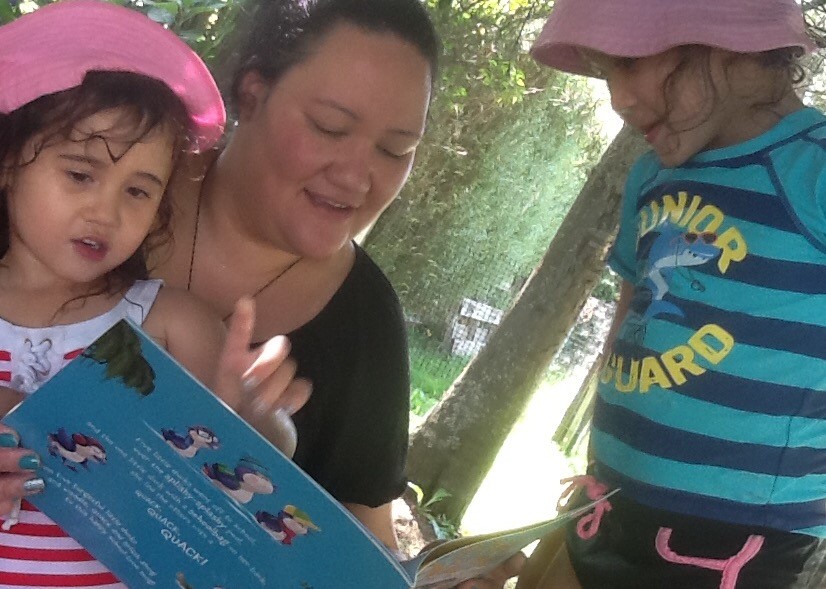 I read this book and listened to the CD before taking it round for the girls to see. I thought it would be most suitable for Miss Three, but the twins were just as interested so we ended up with all three plus their mother sitting down together to read it. I think the timing was right too. It was a very hot day and they had the paddling pool under the tree beside us, so every now and then one of them would jump in the pool to cool off - which of course was in keeping with the subject of the story!

Stories that you can sing along to are always popular anyway with preschoolers (and their older sisters!), and they are all very much into their music, so this was another point in favour of the book. A portable CD player came in very handy so we could listen to it together. Even Mr One (who stayed in the pool almost all the time) sang along in his own way. He can't sing yet, and has only a couple of words, but that did not dampen down his enthusiasm. If his sisters were going to make music, he was not going to be the one left out.

Even before we put the music on, the girls were fascinated by the cover. It is so important that books for little kids have colourful, catchy graphics so they command attention. This cover features the five little ducks setting out for school, completely organised with their sunnies, trendy caps, and headphones. The splishy-splashy pool features on the very first page so we had a momentary break when Miss Three had to go and jump in beside her brother, pretending to be a duck too. The sound of the chorus brought her back quickly, however, as she wanted to join in with all the quacks.

Once the five little ducks and the setting are firmly established, the action begins. The theme of this story is being forgetful, something the twins can relate to - they are always having to be reminded about something or other. This made the story very close to home as they commented on the different things that had been forgotten. Each duck forgot something different, and everyone was held up while the missing item was collected. Lunches, caps, drink bottles. boots, books - all essential items for a day at school! Luckily the five little ducks made it in time, racing to get to their classroom by nine!

Apart from the cute little ducks, there were other critters that the girls discovered - the pet turtle who walked along to school with them, the frogs, and the birds. Stevie Mahardhika's artwork is utterly charming, with that lovely humorous touch as the turtle stands on its head in the water or waits on the school doorstep watching the little ducks run in. Of course, traditionally turtles are slower than ducks, but when the ducks forget things and have to go back for them, the clever turtle arrives first.

I can see the girls having a lot of fun with this book. I would like to see a slightly stronger storage facility for the CD, maybe a heavy card backing for its pouch so it does not get snapped in half, but apart from that the book format is fine. Miss Three is old enough now to treat her books with care. As for Mr One, he is more interested in singing and dancing to the music and playing in the water!

The success of Peter Jackson's Lord of the Rings movie trilogy played a significant role in igniting local artists' imaginations and elevating the genre of fantasy art to a new level in New Zealand. This project and other like it have opened the doors for New Zealand's creative industries and our highly talented artists to demonstrate their creative excellence ... more...