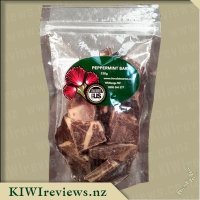 Disclosure StatementFULL DISCLOSURE: A number of units of this product have, at some time, been supplied to KIWIreviews by Chocolates Are Us for the purposes of unbiased, independent reviews. No fee was accepted by KIWIreviews or the reviewers themselves - these are genuine, unpaid consumer reviews.
Available:
via online store and selected outlets

Classic after dinner mint chocolate made with real peppermint oil, not artificial flavourings, to leave a true peppermint flavour. Perfect to put on the table after a nice meal. Made with layered semi-sweet and white chocolate.

Packed in re-sealable pouches that can be re-used before cleaning and putting into soft plastic recycling. Batches are broken by hand into assorted sized pieces.

Peppermint and chocolate is one of those classic flavour combinations which you know will work. For that reason, there are a huge amount of mint chocolates on the market already, in a variety of forms and formats. However, I was really keen to try out this Peppermint Bark from Chocolates are Us as it had a much more artisanal feel about it, particularly containing natural peppermint oil as opposed to a synthetic version.

The pack was a great size- perfect for a treat or a small gift for a very lucky recipient. I loved that the pack is resealable- meaning that the freshness and flavour can be maintained even if you dip into the bag over a number of days. The pieces are all different sizes, having been broken up by hand, meaning that there is literally something for everyone. They also look really special, having had the dark and white chocolate swirled together to make a beautiful pattern. However, the main thing which you are hit with is the beautiful peppermint smell. This was enough to make me reach for a piece to try.

The chocolate is beautiful- smooth, melts in the mouth and has a gorgeous peppermint taste which complements, but never overpowers, the chocolate. It still remains sweet, but is refreshing and leaves you really wanting more after each bite. It is the perfect thing to end a heavy savoury meal with, but is also great to have as a pick-me-up snack or treat at any time of the day. As a little goes a fair way, the pack size is pretty generous, and for a truly hand crafted product, I would say that the price is fair.

Overall we were very impressed with this chocolate. Beautiful in look, taste and smell, this did not disappoint. The pack was great, and for a sharing pack provides great value for money. Such a great idea as a gift, or as a gift to yourself or your family.

The great thing about the Peppermint Bark packaging is you can see exactly what you are getting..... and I liked what I saw! The clear packaging comes in a handy resealable (and reusable when washed) bag which is great if you have the willpower to not eat it in one sitting! Like all flavoured chocolate, I had to have a sniff of the bag and noted that it smelt of sweet fresh mint which awoke the taste buds! The bark consists of dark chocolate and white chocolate marbled together with some peppermint oil thrown in. You can see that they are hand made by the fact that all the pieces are different shapes and sizes which is great if you get a big bit.... not so great if you get the small bit!

My girls eyes lit up when they saw these and I rifled through the pack to give them equally (small) sized pieces! Both loved the look of the chocolate and said they could really taste the mint in the chocolate and that it tasted great. I took a small piece and let it melt in my mouth and found that the mint flavour was not overpowering but nice and refreshing. The chocolate was smooth and delicious and you could tell that quality ingredients were used and no artificial flavourings added.

I really enjoyed this chocolate and the only thing stopping me from buying it again would be the price. You could add to baking, it would be nice atop a chocolate cake or in a brownie, but too be honest, it is perfect just the way it is. It would be great for a special treat or if guests were coming round and you wanted to impress them. Definitely worth a try if you enjoy quality peppermint chocolate! 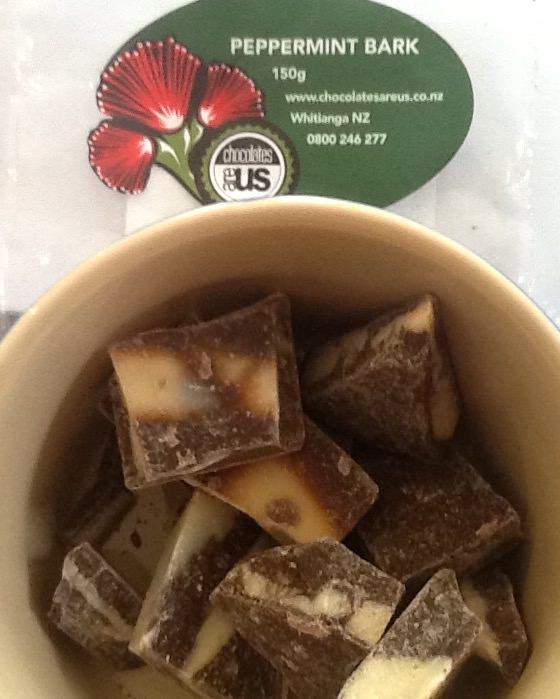 I was intrigued by the name of this product so before I had so much as opened the pack I googled "bark" and "confectionery" as I am one of those people that just has to know new things! I discovered that a bark is a product which contains unevenly layered chocolate, usually a combination of white and dark rather than milk chocolate. Because the pieces are broken rather than cut into uniform pieces, the end result looks like the bark on a tree with its different layers. Now that my curiosity was satisfied, I was ready to open the packet and taste it!

I don't like milk chocolate at all so I was delighted to see that this product combines white and dark chocolate, both of which I do enjoy. Add in the peppermint element and you end up with an after-dinner mint par excellence. No, on second thoughts, after-anything! The pieces are so delicious that I had a second as soon as I had finished the first. That was enough for the moment, but I was looking forward to having more later on.

I then shared the packet with one adult and two children. We had a moment of panic when Mr Nine took a piece that was bigger than Mr Seven's, but we managed to soothe their feelings by swapping Mr Seven's piece with another that was a little bigger. (Their mother got the grubby rejected piece from Mr Seven who had already licked it. The perils of having a packet of unevenly sized goodies!)

Having sorted it all out and ensured that everyone had a piece, I asked for feedback. I had already tasted it so I knew I liked it, but my friends were equally positive in their comments. They all said it had a good chocolatey flavour, but they could taste the peppermint as well and the overall combination meant it was not too sweet. Both the boys have quite sophisticated palates so they tend to prefer more adult-type treats. They all had a second piece without any prompting. How surprising!

We had a few pieces left so decided to have it for dessert as an ice-cream topping. We chopped the pieces into small bits and scattered them over vanilla ice-cream. The adults added a dash of Baileys as well while the boys got extra chocolate, so everyone was happy. It made an incredibly decadent dessert and something we plan to have again some time. The price of the chocolate means it is going to be an occasional treat rather than an everyday purchase, but for a special occasion it would go down well.

I would love to have a photo of the product to show you the size of the pieces, or the marbling of the chocolate and peppermint, but alas, the packet was empty before I thought to take a picture. I guess that's really the only testimonial you really need to the quality of the product. Did I check the nutritional information or the size of the packet? Not at all. I just had a piece and next thing you knew the packet was half empty and was subsequently finished the next day.

But let's look at the other information anyway. Coming in a clear resealable pouch, the packaging is simple but effective. No need for photos of the product, when the entire packet is clear, there is no hiding what you are getting. The packet weighs in at 150g, the equivalent of about 3 Snickers bars, which is good because the nutritional information tells you that the packet holds 3 servings (whoops, only 2 for me!). With 30g of sugar per 50g, this is certainly a high -sugar product, but it's chocolate, so no surprises there.

As is their process, the bark is broken up into pieces, rather than being set into a bar or having a standard size piece, which ensures that each piece is unique in flavour and shape. The peppermint oil creates a refreshing flavour, that cools the mouth down, and reminds one of those brisk winter mornings, while simultaneously clearing the nasal passages like a whiff of Vick's Vaporub.

While I am a glutton with one hell of a sweet tooth, I should also mention that the darker chocolate does also have that feature where it satisfies more than milk chocolate. There were many times where after a couple of pieces I felt good and didn't need to eat more. If I had put the packet away somewhere, then it certainly would have turned into 10 servings per packet. But as I left the packet next to me as a watched a movie, it just disappeared as I habitually consumed everything within arms reach.

Disappointed to hear that this is a temporary product. Hopefully, I can get my hands on some more before they stop producing the batch. But I imagine it won't be long before they bring it back again.

This is what we mean when we say that Cecile's is a taste of New Zealand. With freeze dried boysenberries and dried golden kiwifruit courtesy of Little Beauties (in Nelson), Boys & Gold is a quintessentially New Zealand combination. Add in some seeds, nuts and pure maple syrup, and we think we're on to a winning taste.