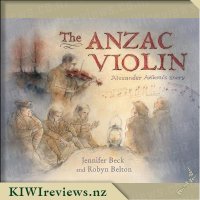 Disclosure StatementFULL DISCLOSURE: A number of units of this product have, at some time, been supplied to KIWIreviews by Scholastic (NZ) or their agents for the purposes of unbiased, independent reviews. No fee was accepted by KIWIreviews or the reviewers themselves - these are genuine, unpaid consumer reviews.
Available:
February 2018

ANZAC soldiers huddle in their dugouts, sheltering for a moment in this place so far from home. In the midst of the fighting, the music of a violin swirls around the weary men, shifting their thoughts back to summer picnics and happier times.

This is a true story set in World War 1. Alexander Aitken from Otago entertained the soldiers in the shadow of the pyramids in Cairo and in dusty ditches during the battles in Gallipoli. Whenever he went off to fight, fellow soldiers kept his violin safe for him. But when he left it behind to join the battle of the Somme, he was sure he would never see it again.

I remember that as I was growing up my cousins and I were told about the World Wars and we were given a first-hand account from our Grandfather. I have always been proud of my Grandfather for all that he had done and admired seeing his various medals earned while serving in the war. Since my Grandfather passed away a few years ago my daughter and I constantly talk about him and his role in the war, her school has started having discussions about the meaning behind ANZAC, so when I saw "The ANZAC Violin" available for review from KIWIreviews I quickly decided to see if I would be chosen.

When I checked my mail and saw my box of review goodies, I was eager to see what I had been allocated and was pleasantly surprised to see a copy of the book in my review box, and couldn't wait for my daughter to get home from school to read it. Once my daughter was home and had completed her homework we sat down and started to read. The first comment my daughter made was in regard to the illustrations and why the pictures didn't have many bright colours in them, I told her I thought that it added a special touch to help make the book seem like a recount or memory from a while ago, also that there weren't too many bright clothes etc because during the war there was lots of camouflage to stay safe. The illustrations were very well drawn and really captured the essence of the story. Both my daughter and I were captivated by the story that we couldn't put it down, we wanted to know whether the violin and the soldier would get to stay together.

This was a very well written story I particularly liked the background of Alexander Aitken's story, and how it had a couple of the place names where the battles took place, my daughter and I then used Google to find out more information. This book has become a special favourite of my daughter and she wants to take it along to school to assist with their ANZAC discussions. I highly recommend this book to all. 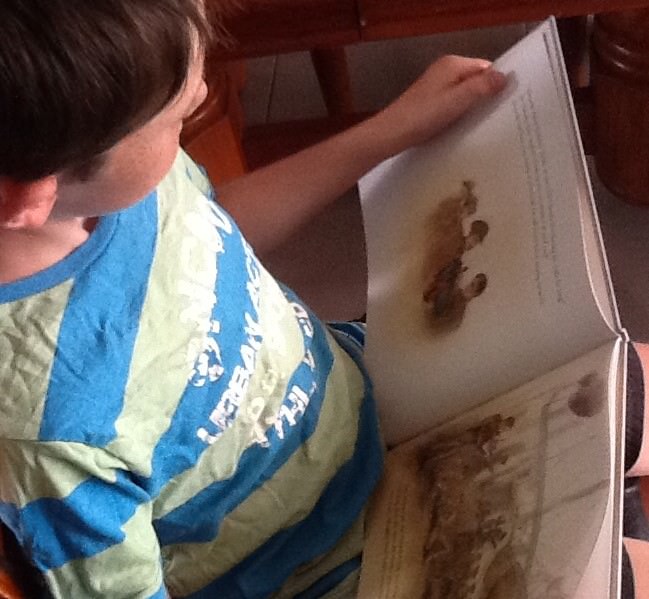 Mr Eight and his mother both thought this was a truly beautiful production. It has a hard cover so should last for a long time, which makes sense as I imagine the whole family will read it in turn - although it is intended for a young audience, it will appeal just as much to older readers. Personally, I found it a compelling story and have already read it from cover to cover several times over. And I am a lot older than Mr Eight and, come to think of it, his mother as well!

The idea of telling a war story through the eyes of a soldier with a particular passion - in this case, his music - is not a new one, but most of these stories are designed for older readers. This book includes plenty of graphics, both archival photos and facsimiles, and Belton's original watercolours which recreate the wartime events in muted hues. Alexander Aitken, the owner of the "Anzac Violin", was a real person, and the violin's adventures really happened.

Mr Eight was fascinated by the descriptions of shipboard life and he thought the idea of having some live entertainment made complete sense. He is old enough to understand that people did not always have electronic devices and sound recordings to provide the entertainment, and as a budding musician himself he knows just how much fun is to be had from playing a tune on an instrument. He is learning to play the piano, and can also play the ukulele and guitar a little bit.

Many of the place names listed inside Alexander's violin case will be familiar to anyone who is conversant with the history of the Great War (now more commonly known as World War 1). There is a list of these names reproduced on the front endpaper of the book, and they include titles celebrated in songs from this era - Armentieres, Marseille and Suez, to name but three. The book's title derives from the acronym ANZAC, or Australia and New Zealand Army Corps - the soldiers from these two countries who fought in the Great War. Because the violin belonged to an ANZAC soldier, its name immediately links it to Alexander or someone just like him.

Presenting history in this way is a wonderful way to inspire youngsters to learn more about their heritage. Mr Eight has read several books set in this time period now, and is becoming quite knowledgeable about various aspects of life and customs in the earlier part of the 20th century. Many of the details in the drawings pick up on the text, helping the reader to visualise what life might have been like for a soldier in the trenches and to empathise with him. What a great way to learn social history!

Mole loves labelling things. So when his best friend, the Lumpy Bumpy Thing, finds a bunch of magic bunnies, Mole is delighted. But what starts as a Bit of Fun soon becomes a Bit of a Problem. Uh-oh! A delightful companion to Dangerous!