« We're Off To Find A Kiwi review 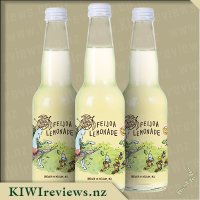 Disclosure StatementFULL DISCLOSURE: A number of units of this product have, at some time, been supplied to KIWIreviews by Pete's Natural or their agents for the purposes of unbiased, independent reviews. No fee was accepted by KIWIreviews or the reviewers themselves - these are genuine, unpaid consumer reviews.
Available:
via Online Store and selected quality retailers

I am the humble feijoa's biggest fan many years ago I would not of looked at them but after moving to a property with a 20 metre long feijoa hedge I had to give in I mean all those feijoas going to waste would be criminal right?! I have never looked back feijoa season for me is the best fruit season of the year it always seems so short lived and I have often wondered how I could savour the flavour throughout the year. I have made feijoa jams and cakes but feijoa lemonade now that is a winner!!

Luckily for me Pete's Natural had already thought of this with Pete's Natural Feijoa Lemonade one taste and I was hooked. The lemonade was quite frankly the best lemonade I have ever tried! I have tried a few different Pete's Natural Drinks now but this was my favourite by far and I can't wait to track down somewhere to buy more from. I know this is a special release as I assume Pete also can't track Feijoa's down throughout the year but I will be excited to see this as a permanent release as it is mind blowingly good.

The subtle taste of lemon amongst the feijoa is a perfect match and with just a light fizz it is easy to drink. Like other Pete's Natural drinks I loved the level of fizz I could drink the whole bottle with no ill effects to my stomach because of too much fizz or sugar. I know it does have sugar in the ingredients but it is not the main ingredient which is always good and with the addition of vinegar it doesn't include a huge list of unknown ingredients to preserve it. I loved this from Pete's Natural a fizzy drink without all the nasties you get in more commonly known soft drink brands. When feijoas are in season I can't get enough of them. We have two trees that are prolific producers of the biggest and sweetest fruit I have ever tasted. They ripen later than most other varieties but it is well worth the wait. We don't spray them as there is more than enough fruit for the humans and plenty left over for any visiting wildlife, and I would rather have a few blemishes on the skin than harvest a product that looks perfect thanks to the chemicals added to it!

With this feijoa fixation in mind, I was very excited to see that Pete's Natural has included a feijoa variety in their fizzy drinks range. I could not wait to see if the flavour was as good as the whole fruit. Imagine being able to enjoy feijoas outside their short season! The first impression was promising - a strong scent of ripe feijoas leapt out as soon as I loosened the cap. This was looking hopeful!

I poured two glasses - the quantity is about right for two people to share so we decided to have it with our dinner. And we toasted Pete's Natural as we both took our first sip. Would it live up to expectations?

I am delighted to report that both of us loved it. The feijoa flavour dominates the lemon so that there is no conflict between the two, and the sweetness level is about right - what you would expect from a ripe fruit. The fizz factor was about right too, enough to make it interesting but not so much that the flavour was affected. Had I been on my own I would probably have finished the whole bottle!

Once again, the product is packaged in a very attractive glass bottle featuring cute graphics. I like the way that Pete's Natural present their drinks in an interesting manner. It would certainly draw the customer's eye in a supermarket where lots of different branded drinks compete for visibility. The price is quite high, but you are paying for a boutique product which is aimed at consumers who like to know what they are eating and drinking. And anyway, how much would you pay for a fresh feijoa out of season? This way they can be enjoyed all year round.

To date my favourite drink in the range has been the Lemon Chilli, but now that I have been introduced to Feijoa Lemonade, I might have to rethink my priorities. Maybe I should just go out and buy more of both so I can do some more research!

After having tried other drink's in the Pete's Natural range in the past and finding them super delicious, I was excited to see some new flavours up for review, especially their Feijoa Lemonade! Feijoas are one of those fruits that I absolutely love, as does my 4 year old but sadly they're never around long enough throughout the year.

The first thing I noticed when I went to open the bottle up was that there was a bit of sediment at the bottom of the bottle, but with a quick, gentle shake of the bottom this was soon mixed in and dissolved. The bottle was easy to open and with my initial first taste I was impressed to find the drink was lightly carbonated, not overwhelmingly fizzy like some drinks!

The taste itself was amazing, it was like a party of flavours in my mouth! The Feijoa was definitely the most standout flavour, more so than the lemon which was awesome, as usually I find in such drinks that oranges or lemons are usually the thing you can taste the most, not in this case, where Feijoa is listed higher on the ingredient list than the lemon. Miss 4 being a huge Feijoa fan herself, I decided to give a taste to, to gain her opinion without telling her what flavour the drink was and it was an instant reaction of "ohhhh yummy it's a Feijoa drink" the only problem after this was the fact that she wanted to drink the rest of the bottle!

In Pete's Natural styles the bottle is super cute, see through glass so you can see the amazing product you are buying, with the coolest labels that I have ever seen on a bottle. This particular one features a feijoa tree with a group of people and feijoa people collecting up feijoa into baskets, I love it and am keeping it alongside my other Pete's Natural bottles!

If you are looking for a delicious tasting, refreshing drink that doesn't have a load of sugar and artificial flavours like most fizzy drinks, I recommend you try this not only does it only contain sparkling water, feijoa juice, raw sugar, lemon juice and white vinegar (all things you'd likely find in your pantry), it is also made right here in New Zealand from locally grown fruit so in buying this your buying NZ made! Totally recomend this and will be looking to buy more of it.