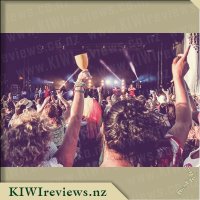 The Winery Tour is about three things that are great about New Zealand: our music, our wine and our scenery. From its beginning in February 2007, the Winery Tour has celebrated this country and its people. It is 100% New Zealand.

The Winery Tour was conceived in the summer of 2006 when promoters Brent Eccles and Campbell Smith were looking for a venue in Nelson for a Bic Runga national tour stop. On the advice of locals, they booked Neudorf Vineyards in Upper Moutere for an outdoor show. It was a huge success. A magical performance by one of New Zealand's greatest songwriters in a stunning location.

The following summer, the promoters announced the first national Winery Tour. They found wineries and vineyards that had the right "feel", beautiful locations that they thought would complement live music and, of course, produced great wines, and winery owners who understood and were excited about the idea.

Late January, February and early March is the best time of year to stage an outdoor concert series like the Winery Tour. The weather is generally clear and warm, summer holidays are over, parents are back to work, kids are back at school. Evenings are long, warm and balmy. It's also right before most wineries go to harvest in March.

Between that first Winery Tour in 2007 and the 2015 tour (there was a break between tours in 2016), 139 shows have been played around New Zealand at venues ranging from as far north as Tutukaka to as far south as Invercargill. Over the years some Winery Tour traditions have developed, the very staples that define the event: each year the tour has three acts on the bill, the artists are always New Zealanders, gates open at 5 pm, first act on at 6 pm, last act finishes by 10 pm. The seating is all GA: nothing is reserved. Kids under 12 get in free with a paying ticket- holder. It's all about family.

We could not have asked for a more perfect afternoon: warm, sunny but not too hot, and with little or no breeze. It was the ideal time of day for a concert, and Friday evening was a good choice: the weekend was pending so there was no urgency to get back home. Two adults, two children (Miss Five and Mr Seven), a picnic basket, and a selection of deckchairs and other random essentials. All set and ready for an evening's entertainment.

Our chosen venue (Vilagrad Winery in Hamilton) is frequently used for events like this: it was immediately clear that the organisers knew what they were doing. Parking was close by with plenty of attendants to ensure that everyone's car was lined up sensibly - important when some people might leave before the end.

After the mandatory bag search at the entrance (to ensure that people were not bringing in glass bottles and other unacceptable items) we made our way to the audience area. There were two sections, one for those who had brought their own deckchairs, and the other for the groundlings who preferred to sit on a picnic rug. This was a great idea: there is nothing worse than going to a concert and sitting on the ground only to have someone else park their chair in front of you and obscure your view.

The entertainment kicked off with Stu from The Breeze. He gave a rundown on what we could expect from the evening, and even demonstrated with a short song of his own (about Benny Tipene!) by way of introduction. This went down very well with the audience, so when the real Benny Tipene took the stage, everyone was clapping and cheering with excitement. Benny is a relative newcomer to the scene but he won the audience over immediately with his smooth delivery and tuneful voice. We enjoyed sitting back and just relaxing while we listened to his music. This was the first time the children had been to an event like this, and their appreciation was obvious. They copied the adults and just relaxed too. I had not heard Benny before so I was impressed by his style and presence.

After his performance was over, he went off to the merchandise tent to meet the public and do signings. We had a fairly long break before the next performer so took advantage of this to eat our dinner. It was impressive to see the arrangements for rubbish collection - clearly marked for recyclables and other items. The ground was amazingly free of litter in view of the fact that most people were eating at this stage. Some had brought their own dinner (as we had) but there was plenty of "show" food on sale - pizza, hot dogs, chips, Tahitian and Vietnamese cuisine, and tacos as well as coffee, tea, soft drinks and wine. The stalls were all set out at the edges of the field so that those buying were not standing in front of other people.

It was then that we had our first disappointment. Because we had a couple of large picnic bags and a folding table, my daughter had planned to leave me with the children while she dropped these items back at the car when they were no longer needed. That would mean we would manage the children and the deck chairs when we went to our car at the end of the concert when it would be dark. But when she went to the exit she was told that if she left she would not be allowed back in again. This was something that has not happened to us before - usually you get a "bracelet" or a stamp on your hand so you can come and go. When you have young children this becomes particularly important. I am not sure why this was imposed but maybe the organisers could rethink it for next year,

Bic Runga (Ms Personality) was the second act. She is a professional through and through. She does not just step on the stage - she totally owns it! Her voice is tuneful and sweet but there is an inner power there which is permanently threatening to erupt. She presented some of her older, familiar songs in between tasters from her latest album "Close Your Eyes". People sang along to the familiar ones and tapped along to the new ones.

Throughout the evening the music had been becoming steadily louder; now it was almost too loud and Mr Seven was becoming more and more uncomfortable. He has acute hearing and his ears are very sensitive to loud noises, so I took him over to the merchandise tent where there were children's earmuffs for hire. This did the trick. I gladly paid out the $10 hireage plus the $20 deposit so he could relax again and enjoy the music. On reflection, we should probably have sat further back from the speakers, but at the start the volume had not been quite so loud.

We could not fault the rest of the organisation. A small army of scrupulously clean portaloos catered for the crowd with little effort: the organisers had not stinted here, and it did make a different to comfort levels. There was a separate disabled portaloo which was huge - I looked in to see what the facilities were like and I was impressed by the thought that had gone into this. There were several people present in wheelchairs and it meant they were fully catered for as were parents with very young children.

During the second break, I took the children for a walk as they were getting restless. To one side of the stage was a water station where people could fill a water bottle (provided free by the organisers) with drinking water from an enormous tank. This was great because, although there were drinks available for purchase, the children had already had lemonade so we preferred them to stick to water for the rest of the evening. Beside the water station was a small helicopter. This was a source of great fun for the children who were able to get inside it and play at being pilots. Other children were turning cartwheels and playing leapfrog alongside. It was very much a family event so the children were able to get rid of some energy while there was nobody performing on the stage. They were all very well behaved but there is a limit to the time a child can sit still.

Our second disappointment came soon after Brooke Fraser started singing. Like Bic Runga, she is an accomplished performer although she does not have quite the same depth to her voice: it does not have that latent power that really comes through in Bic's voice from time to time.

We would love to have stayed to the end to listen to her full performance but it was starting to get dark and Miss Five had fallen asleep. This was a problem as we had to negotiate our way across the field and through the car park with four deck chairs, a folding table, the picnic bags, four back packs, and a picnic rug. My daughter had to carry Miss Five so she could not manage much else. Mr Seven and I had to carry the rest and for part of the way it was difficult to see where we were going. Had they allowed my daughter to take some of the gear to the car earlier, we could have stayed to the end as we would not have had so much to carry out.

But apart from the problem with car access and the sound being turned up too loud for comfort, we did enjoy ourselves. Mr Seven had a ball once he had his ear muffs in position. Miss Five enjoyed everything and is determined to return next year and stay awake till the end!

Conducted by Eirian Owen and featuring presentations by the whole of the The Aran Mountain Male-Voice Choir, as well as trio acts by Tom Evans, ... more...