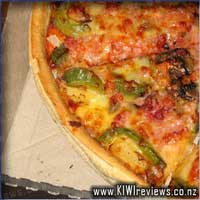 Disclosure StatementFULL DISCLOSURE: A number of units of this product have, at some time, been supplied to KIWIreviews by Hell Pizza or their agents for the purposes of unbiased, independent reviews. No fee was accepted by KIWIreviews or the reviewers themselves - these are genuine, unpaid consumer reviews.
Available:
at your local Hell outlet

A great combination of our most popular toppings, served on a base with our special recipe tomato sauce, mozzarella cheese, herbs and spices.

My absolute favourite pizza on the menu, I add avocado to it and it brings out all the flavours of each topping.

As much as I love this pizza, I would prefer the thick crust but there is no option to choose bases which means I can easily eat the whole pizza.

I love the free delivery on Tuesdays and that is the only time I order, the internet ordering is really quite easy.

With the taste, I absolutely loved it because I love 'supreme' pizzas. I liked everything on it. I really liked the tomato sauce and the melted cheese.
I think there was just a little too much on it, and I started to get really full after only 2 slices.
I thought the price was not too much, and because there was so much on the pizza, we could have some the next day. This is good value.
They got it done in time, I was really hungry and needing some dinner and they didn't make me wait too long.

Compared to many other 'Supreme' variants, this one has a bit of a mixed bag really...

On the *plus* side, the ingredients are chunky and tasty, clearly visible in decent sized bits... unlike some 'supreme' pizzas on the market. The crust was firm, yet not chewy, and didn't sag out from under the toppings.

On the *minus* side, there weren't a lot of toppings to cause sagging, the edge of the crust was quick tough, and the flavours were so enmeshed, that they averaged out to something wuite average.

Overall, not the greatest pizza on the menu, but OK if you can't make up your mind to try something a little more 'sinfully delectable'.

Won't Crack or Split When Rolled
Backed by The Farrah's Promise, Farrah's Wraps are guaranteed not to crack or split when ... more...