« Why Did the Chicken Cross the Road review 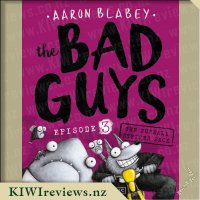 Disclosure StatementFULL DISCLOSURE: A number of units of this product have, at some time, been supplied to KIWIreviews by Scholastic (NZ) or their agents for the purposes of unbiased, independent reviews. No fee was accepted by KIWIreviews or the reviewers themselves - these are genuine, unpaid consumer reviews.
Available:
May 2016

The Bad Guys Episode 3: The Furball Strikes Back product reviews

My biggest complaint about this book is that it advertises the next book in the series, so as soon as we finished the story my daughter was automatically asking for the next book. The same thing occured after reading the first and second book so was kind of expecting it but still it is annoying considering how long we have to wait to find out what will happen.

Just like the previous two books we loved it. I had originally requested to review from KIWIreviews but was so scared I would not get picked that when we saw it advertised in the book club I jumped at the oportunity to get it for $4 less than the actual recommended cost. My daughter had the biggest smile on her face as she ran out of school on Thursday clutching the book to her chest and before she had put on her seat belt she was trying to read it to me. Unfortunately had activities on Thursday and Friday so she had to very painfully wait until Saturday before we could sit down and read.

The chapters are nice and short and it is easy for kids to read and follow. She was cracking up as she read the pages and loves who the font is bold and whacky so she yells and puts on voices when needs to. The pictures are not what I like but in this book it works and they are well done for what they are. I especially love the part where the snake was getting lippy so the wolf stopped him and the shark stopped the wolf without giving too much away - hilarious and just so zany.

The story is extremely funny, very whitty and so very very weird. It follows along from the previous two and I think it would be in your best interest to read the others or you would be a tad confused as it does not give much of a recap at all. It leaves you wanting more and now we are holding out for the forth instalment. definitely a great little book that my daughter is now onto her second time reading.

My son (8 years) loves the bad guys series and has been eagerly awaiting the latest book. He wasn't disappointed - the story just keeps on getting weirder and weirder and more hilarious.

There is very little lead up to the action in this book so I highly recommend reading the other two books first. This story carries on from where the last book left off and the good guys find themselves dealing with a real bad guy who we were briefly introduced to at the end of the last book. The story is fast paced and humorous with lots of action and an unexpected twist at the end. It also finishes on a cliff hanger which my son was not happy about. There are lots of black and white illustrations and the comic book format makes it easy to read with just a few paragraphs on each page. It would make a great first introduction to chapter books and can be enjoyed by a wide range of ages.

This book has already been read and re-read many times in just the couple of days that we've had it. I've even caught my son stashing it in his bed for reading after lights out and it's inspired him to start writing his own bad guys story. Definitely a winner.