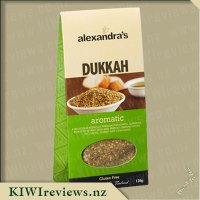 Disclosure StatementFULL DISCLOSURE: A number of units of this product have, at some time, been supplied to KIWIreviews by Alexandras or their agents for the purposes of unbiased, independent reviews. No fee was accepted by KIWIreviews or the reviewers themselves - these are genuine, unpaid consumer reviews.
Available:
at selected quality supermarkets I was only introduced to dukkah recently when it was first added to KIWIreviews as an item available for request. I had honestly never heard of it, and had no idea what it was, so I had to do some searches on the internet to actually figure out what it was about. After trying out the piquant variety with ciabatta bread and oil, it is now a favourite in the household, especially when having guests around. So I thought I would try out the aromatic variety too.

I'm not usually too much of a fan of the aromatic side of spices. I look more for the spiciness and heat, than smell, but coming from a household that loved to prepare curries, coriander and fennel were commonplace, so I've gotten used to it. Opening the packet, I was instantly hit with the aroma of the coriander and fennel. The nut and seed elements smell very similar to the piquant variety, with obviously the more aromatic herbs put in place too (the fennel provides a bit of an aniseed like smell and flavour).

So instead of just using it with oil as something to dip bread in, I went for a slightly healthier meal and used it as a coating for a chicken breast. So I simply did a butterfly cut on the breast (as good an an amateur can do), a quick brush of oil, and then covered both sides with maybe two tablespoons of the dukkah, before pan-frying the meat until cooked through and adding some simple potato and vegetables on the side.

I actually really enjoyed it. The dukkah has many different ingredients of many different sizes and quantities, so the actual flavour of each bite has some variability, with some being nuttier, others being more aromatic. The dukkah coating itself also protected the exterior of the chicken itself from the direct heat of the pan, so the meat barely required a knife; it was soft and cam away easily (almost to the level that it was braised. I'd say it fell of the bone, if it actually had any bones to fall off of). Despite me not leaving it to marinade at all, the aromatic flavours of the chicken could be tasted throughout the meat, which was surprising, as I prepared and cooked the meat in under 5 minutes, so the aromatic herbs have a good strength to them.

The aromatic herbs aren't really a flavour that I would enjoy on their own as a dip with bread, but in conjunction with something else, such as meats, it is a very quick and easy product to use. I love the combination of flavours in this product. Coriander has always been a favourite of mine and it features heavily in this mix. It took a little while to actually get the spice out of the packet and into a storage jar because I kept stopping to savour the rich smell that erupted out as soon as I broke the seal!

I started by serving it the traditional way as an entree with some olive oil and a range of breads to dip. Someone had brought some heavy black bread and someone else contributed fresh sourdough, so we broke them all into small pieces and everyone started dipping. It is a very pleasant way to share food, much more basic than the usual chips-and-dip, and probably a much healthier option too if you don't go too heavy on the oil. We managed to eat our way through three loaves (seven people were there) and were almost too full to eat anything else.

However, I had always wanted to try dukkah in another way, so here was my chance while I had plenty of people to be my guinea pigs. It would take a little time to prepare, but nobody was very hungry after all that bread so it did not seem to matter if I kept them waiting a little bit. My plan was to use the dukkah to coat some prawns instead of using tempura batter.

I whisked an egg and tipped all the prawns into the mixture, swished them round to moisten them, then dropped a few at a time into a bowl of dukkah to coat. I cooked them on an oven tray until the coating was light brown. I had thought they would be crisp, but they were still quite soft. However, they had that wonderful coriander flavour that is to die for! I did not want to overcook them so I described them as "Dukkah Prawn Tenders" and nobody was any the wiser. And of course, compared with frying or serving with mayonnaise, this method was a great deal healthier,

I served them with some Barkers Not So Sweet Chilli sauce and a green salad. The whole kilo disappeared in record time and if anyone had been too full to eat more when they finished their bread, they had a quick rethink. I don't think I will ever go back to frying prawns. This way they are so much nicer. And dukkah is on my shopping list because I used up the entire packet, but it was in a good cause and it fed a lot of people.

I love dukkah. I was introduced it to at a party many years ago and I thought it was brilliant. I took to buying it with an infused olive oil and some bread bites for every gathering. So when this came up for review I had to get my hands on some. I put my hand up for the aromatic one as I thought it might be a little different. I was right.

This mixture has a bit of an aniseed kick to it, from the fennel. That's one of the key flavours you get. It's still nutty as well, but it's more about the crunch of the nuts and then the fennel. I decided to try this in several different ways. So the first thing I did was get some pizza bases. I put a light spread of olive oil over one, and then sprinkled this dukkah on top. Then for the other I did the same, but then topped it with cheese. I grilled both til they were warm and the cheese was bubbling.

We had friends over and I gave each of them a wedge of both pizzas. They all enjoyed the treat. Some likened the flavour to black jelly beans, so I think if you aren't huge on aniseed then this is probably not for you. Our little group enjoyed it though. The kids liked it with cheese, but were otherwise not too keen.

I also tried this as a meat rub onto chicken that I then roasted. That was quite good. However, the most successful experiment was roasted orange kumara. I did small kumara pieces and then coated them with olive oil and the dukkah. I roasted them until they were soft. They were so yummy hot, but just as delicious cold as a salad the next day. I liked that so much I have been buying a big kumara every week since!

Chew your way to fresh with new ECLIPSE Chewy Mints!

Packaged in a slim-line tin, ECLIPSE Chewy Mints can effortlessly fit into your pocket or handbag while you are on the go.

They are perfect for freshening up after lunch or before a meeting and there are three flavours to choose from: Spearmint, Peppermint, and Fruit Trio, which is a delicious mix of raspberry, orange and lemon-lime.