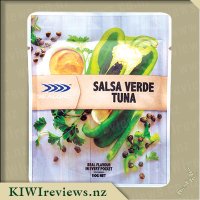 Disclosure StatementFULL DISCLOSURE: A number of units of this product have, at some time, been supplied to KIWIreviews by Sealord or their agents for the purposes of unbiased, independent reviews. No fee was accepted by KIWIreviews or the reviewers themselves - these are genuine, unpaid consumer reviews.
Available:
at selected quality supermarkets

What makes our tuna pockets taste so good? It's the fusion of real ingredients. So you get to enjoy the distinctive Italian taste of Tuna, capers, mustard and parsley. All gently slow cooked to lock in the flavour.

I'm not a huge seafood fan but when it comes to tuna I could eat it all day every day. I often keep tins of tuna in my locker at work for those days I manage to leave lunch at home. I never seem to run out of things to try with tuna either from on toast, in salads, fish cakes or fish pies. If there's a way to use it I have probably tried it at least once. As you can imagine I was very excited to see that Sealord had brought out a new range of tuna, I couldn't wait to give it a try.

The day it arrived I was making cottage pie for dinner that night so I decided that I would use some of the potato and make myself a mini fish pie for lunch the next day. Opening up the packet and putting it in a dish I was a little put off by the look of it, just tipped out it didn't look too appealing at all. Deciding I needed to taste a little on its own I put aside what it looked like and took a taste. I'm pleased to say the taste was a lot more pleasing than the look. The tuna was nice and moist and the rest added a nice herb flavour to it, there was a wee hint of spice but nothing too over powering. While it was tasty it was completely different to other flavoured tunas I had tried.

I decided to go on and continue making the rest into a mini fish pie, deciding the tuna alone had enough flavour I just added a bit of mashed potato and cheese to the top and threw it in the oven. The result was one of the yummiest fish pies I have ever made. My only complaint is there wasn't enough of it, next time I would add a few pouches in and make a bigger pie. While I'm not sure I would buy this flavour again if I wanted just tuna on toast or crackers as on its own, I will be buying it to make fish pie again for sure.

I wasn't too sure what to do with this one... having rattled through my 'usual suspect' with the other three varieties I reviewed, this one was... odd. I can't say it sounded hugely appealing - I do like capsicum and have started to enjoy it a lot more in recent years, I am a fan of capers in tartare sauce but haven't really acquired the taste of them in other ways, mustard and parsley are things I will quite happily eat as ingredients, but slow-cooked with tuna is a new trick in my book.

In the end, I went with something a friend suggested, and mixed this with rice and cooked it as a 'stuffed capsicum' with a grilled tasty cheddar and breadcrumb topping. I didn't prepare the capsicums properly and the results were diabolical to look at, to say the least, so I decided not to do a photo. However, they tasted pretty good... not quite the flavour profile I normally go for, but it was something new and it was anything but awful. Quite the opposite, they turned out to be very tasty, in a green-herby kind of way.

Overall, I am not 100% sold on this flavour, and while I may be tempted to try it again in future, I think the others in range all hold more appeal for me. It's a bit sad - there's nothing actually wrong with this one, but something has to take last place and when it comes to these tuna pouches, this one sits in that spot in my personal ranking. If you are the sort to happily eat raw capsicum, you'll find this one may sit higher on your list, because it *is* a good quality, tasty product.

I have never actually heard of Salsa Verde before, so this tuna mix was something very new for me, and as such I was a little unsure about this stuff at first. I left this mix for last because of this fact, but when I did try it I was quite blown away by what it was like. My Dad said it was a bit like raw Capsicum, and I have to agree, but first off: I like the taste of raw Capsicum, and Second: there was actually a bit more to it than just that flavour.

First off, the Tuna itself was quite lovely, it was moist, and at the same time it had a lot of flavour in it, very much unlike the kind of tuna you may find at the supermarket. The tuna had a small amount of spice to it, as was expected, but it was quite moderate to be honest. The stuff also had that tiniest hint of Chlorophyll in it, but thankfully it was only a tiny bit; Just enough to give it that natural taste, but not too much so as to make me feel like I was eating grass, so to speak.

The visual appeal of this mix was a bit dismal, as the green Capsicum made the stuff look a little like... well it didn't look very appetizing, I'll say that much. That aside, however, I would say that this was a very nice product, It went well with Aioli in a sandwich, that's for sure, and if I was able to find more packets of this stuff I would happily get some more. That will be quite easy too, as I think that for a Sealord product, this is actually quite cheap!

It does make sense, however, as the quantity of tuna was a little small, but it did go a long way for me. Overall, I think that this is quite a high quality product, I was quite impressed by it, I would highly recommend it to anyone out there who would like to ad something a little different to a meal. I personally believe that it will fit the bill nicely.

This rich, warming soup is stuffed with roast chicken, bacon and wholesome veges. Seasoned to perfections with a touch of thyme; this soup rules the roost.