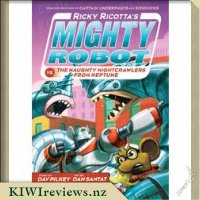 Having a Mighty Robot as a best friend is great, but it's even greater when he can help build a fort! After some pounding, some banging and some laser eye-welding, Ricky and his Mighty Robot build the coolest fort ever. But when Ricky's cousin Lucy shows up, she renames the fort a 'castle' and says it needs curtains - rats!

But these are the least of Ricky's worries - Nimrod Night Crawler has created a wormhole so he can send his army of evil Night Crawlers to help him take over the world, and Ricky's Robot is trapped in a deep pit! Without his Mighty Robot, it's up to Ricky and an unlikely hero to put a stop to this nightmare from Neptune.

Ricky Ricotta and his Mighty Robot was one of the very first chapter books that my son would read independently not long after he started school. Three and a half years down the track and he still loves them.

In this book Ricky and his friends must save the Mighty Robot and planet Earth from the Naughty Nightcrawlers from Neptune. These books all follow a very simple formula but with a different bad guy each time. I think this is one of the things that makes them appealing to young readers and easier for them to understand.

I'm really glad that they decided to release these books in colour because it just adds so much more to the overall reading experience. The illustrations are bold and plentiful and as the pace of the story picks up there are some comic strip style pages as well as the flip-o-rama which depicts the main fight and allows you to animate the action. The chapters are short and sweet which makes them a great first introduction to chapter books but older children can still enjoy them as well. I love the overall message of friendship which is something that all the books in this series have and even though the story is simple, it works and there is never a dull moment with lots of action and a bit of humour thrown in there too.

We really enjoyed this book and I think it will appeal to both boys and girls. We can't wait to read the next book in the series.

This is an adventure story with a difference. Not only does it feature a fun escapade with the heroes Ricky, his Mighty Robot, and their friends, but it also includes three comic strip sections and one chapter which consists entirely of five back-to-back Flip-o-Rama segments. At the start, when the story is slower moving, it is divided into conventional chapters consisting of narrative and pictures. As the story picks up its pace, however, the narrative is interspersed with comics and then, in the second to last chapter, the style moves to Flip-o-Rama before returning to the original format for the ending of the story.

Although this is one of a series, it is completely standalone so it did not matter that this was the first time the children and I had met Ricky Ricotta. We all loved the illustrations, which are bold and colourful and definitely designed to appeal to young readers. The mix of scientific fact, science fiction, and pure fantasy proved to be a fun way to introduce the planets in our solar system and to touch on the concept of the vast distances from one point to another in outer space.

We read the book in one sitting. Miss Four was quite tired and lost interest part way through; it is pitched at a slightly older audience. In another few months we will try it again. Mister Six, on the other hand, was enthralled throughout the whole story. We took turns reading aloud, both of us enjoying the adventures of Ricky and his friends. We managed to work out how to make the Flip-o-Rama pages work, a process which generated a great deal of laughter, and there were other hilarious episodes which made him giggle so much that he dropped the book!

If you want to find out just what those hilarious episodes were, I recommend that you read the book for yourself. It would spoil the plot if I were to explain what happened, but Mister Six and I both found it extremely funny and well worth a second (or third!) read.

Cuzzie and Bro is the adventure story of twin piglets born in a litter of ten on a farm bordering To Urewera National Park. The tiny twins are trampled by their siblings in the fight for food, and Mrs Tama - the farmer's wife - is forced to take the undersized and weak piglets into her care and hand-rear them.

Life on the farm with their barnyard friends and playful school children is idyllic for the twins. That is until tragedy strikes and everything changes.