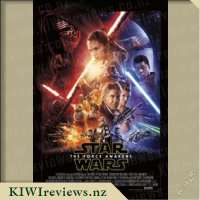 Thirty years after the defeat of the Galactic Empire, the galaxy faces a new threat from the evil Kylo Ren (Adam Driver) and the First Order.

When a defector named Finn crash-lands on a desert planet, he meets Rey (Daisy Ridley), a tough scavenger whose droid contains a top-secret map. Together, the young duo joins forces with Han Solo (Harrison Ford) to make sure the Resistance receives the intelligence concerning the whereabouts of Luke Skywalker (Mark Hamill), the last of the Jedi Knights

Predictably the special effects on this movie were fantastic. I really like how they kept to the 70's theme and kept everything looking the same, even though, they could of changed the concept completely and had better looking aliens but they stuck with it which is applaudable. It continues on perfectly from the 6th movie (or the 3rd however you want to look at it) just thirty years later. Without giving too much away a lot of the characters from previous movies make an appearance in this film as well as a lot of new characters.

As the opening scroll appeared on the screen applause was met throughout the theater. Although it was 12.01am people were jumping out of their seats yahooing and taking selfies on phones. It set the movie up perfectly and in short the movie is about everyone looking for Luke Skywalker who has gone into hiding.

The movie holds your attention perfectly and even when it goes into the heavy talk it is still light and enjoyable. There is rather a lot of humour in the movie which did not seem forced or out of place. The new droid BB-8 is a scene stealer and oh so cute. Chewy also steals a lot of the scenes and I found (although I was dragged to the movies kicking and screaming) I really enjoyed the movie and can not wait until the next one. The new characters are a fantastic edition and I can not fault any of the movie at all - besides I was kinda hoping Darth Vadar would still be alive somehow. It is however, nice that he is mentioned.

The movie is basically star wars but yet it isn't (when you see the movie you will understand that statement). Not a new concept at all but a lot of theories about who Rey's parents are. I loved the way the old characters popped up and how R2-D2 and the new droid are together. Only wish I understand what the beeb beeb beeb means all the time. Well worth a watch if you are into the Force or just want to be a Jedi.

In Chile, a group of travelers who are in an underground nightclub when a massive earthquake hits quickly learn that reaching the surface is just the beginning of their nightmare.

The disaster leads to the collapse of societal norms, including murder, rape, looting, destruction of property, and other anarchic activities. There is also the looming threat of a tsunami after the earthquake.